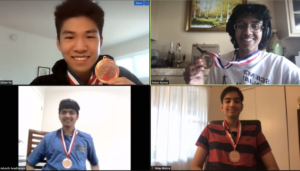 The Science Bowl A team placed third out of 30 teams at the Stanford Linear Accelerator Center (SLAC) Regional Science Bowl tournament on Feb. 6, coming out of a tiebreaker win in the quarterfinals to beat Basis Independent Silicon Valley in the semifinals of the day-long competition.

The B Team, consisting of junior Jeffrey Hu, sophomores Adam Xu and Nidhi Mathihalli and two freshmen, Nikhil Mathihalli and Aiden Ye, made it past the preliminaries but was eliminated in the second round of the tournament, ultimately finishing in 16th place.

Even after losing their top player from last year, Jeffrey Xu, to graduation, the A team still performed well, Mishra said.

This year, the rules for Science Bowl were significantly different to accommodate for difficulties with running the tournament over Zoom. Instead of the traditional head-to-head buzzer contests where competitors would race to answer questions on chemistry, biology, physics and mathematics before the other team, the competition had longer time limits to answer questions and no direct competition. Moderators read the same questions to each team separately and the teams with the highest number of points after each round advanced to the next round, meaning that the competition placed a greater emphasis on knowledge rather than speed.

For many on the team, the new rules were tough to get used to. For example, the team had to discuss potential answers to all questions but also have someone raise their hand before time ran out, requiring additional coordination to maximize their points.

Going into the competition, participants were unsure how their preparation stacked them up against the competition. The team was confident that they would make the top eight but was uncertain how the new rules would affect their placement. Last year, the team placed second after losing twice to Harker in a double-elimination bracket.

“In a typical year, speed was our main strength with several of our team members being extremely fast at computational math and knowing the answer with limited clues,” Kumar said. “However, the new rules basically took away the speed component of the competition, and in normal years it was pretty clear that we lost out in terms of knowledge.”

To adjust to the new rules, the team began the year practicing by voice calling in the messaging app Discord, but transitioned to Zoom later in the year in order to mimic the competition environment. The team meets on  Zoom on Tuesdays after school before splitting into their respective breakout rooms and practicing for an hour and a half.

Though the A team has performed well in previous years, there have been concerns among members regarding low interest in the team for the future years.

“My main concern is that I haven't seen too much interest in studying for the Science Bowl, but I'm sure that the younger team members will pick up the slack when the seniors leave,” Kumar said. “I have pretty high hopes for the team going forward since our A team had two underclassmen and we’re only losing two seniors next year.”