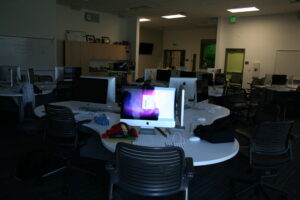 The photo shows the interior of the new high-tech MAP building.

When the first-period MAP class entered the new multimedia center on the first day of school, student were amazed by the brand new high-tech equipment. They ran to explore each corner of the building, from the green screen to the recording studio, in awe of the building's similarity to a real-life television studio.

When the first-period MAP class entered the new multimedia center on the first day of school, student were amazed by the brand new high-tech equipment. They ran to explore each corner of the building, from the green screen to the recording studio, in awe of the building’s similarity to a real-life television studio.

After years of anticipation and planning, the Media Arts Program (MAP) Building, located behind the weight room, is now open to all students for their multimedia needs, whether for drama, music or film. The 2,300-foot building includes a green screen, a multimedia journalism set, a soundproof audio recording studio, a 24-channel mixer and a control room.

The MAP building currently houses Multimedia Journalism (MMJ), Film making and first-year MAP classes. The building cost an estimated $3 million to construct, with about a third of it paid by a state grant, according to principal Jeff Anderson.

After visiting the facilities of a number of universities and companies around Silicon Valley and even out of state, such as Arizona State University’s Walter Cronkite School of Journalism and Mass Communication, MAP teacher Tony Palma and others involved in the project designed the facility to create a collaborative work environment where students can easily communicate with each other but also have individual space.

“We’ve seen the facilities they have, which helped us design our facility and what we want it to be—to be flexible and able to grow, to be able to fit the content and product that we plan to record,” said Palma.

Currently, the new building is used regularly for all MAP classes, multimedia journalism and film making. The high-tech technology enables students to explore their interests in multimedia in a real life setting.

“It’s really nice and resembles a real life studio,” said senior Courtney Maa, who is part of the MMJ program. “The new technology gives us the opportunity to learn about the careers out there that require this type of equipment.”

In his first year at the building, Palma anticipates for the center to expand SHS TV and the MMJ program. His goal for this year is for the multimedia journalism class to showcase their work to the entire school community.

He wants his students’ work to be professional—”not what you see on YouTube where people are hitting themselves with skateboards . . . [it will] make a difference in the community and in the world.”

As the manager of the newly completed building, Palma also aims to train students to become comfortable with the equipment so that they can operate it without his direct supervision.

For students not in the MAP program who want to use the facility, they must first identify their goal and then register for a time to come in so that a student familiar with the equipment can assist them, Palma said.

“Whether it’s a student play that we want to broadcast, or it’s the marching band, or an individual who wants to record something for college, or as simple as someone who is recording something in a foreign language, we want to make these opportunities available,” said Palma.

Anderson hopes that the building will help create hands-on exposure to a new field and that students might consider a career that they previously did not know much about. He also foresees the versatility of the building helping to expand Saratoga High beyond the physical campus.

“I think it’s breathtaking what the building can become, ” Anderson said. “It has a lot of potential.”

While most video studios in high schools and some colleges are just regular classrooms that have been retrofitted, Palma said that most of the contractors and other teachers who came to tour the facility had never seen a facility this dynamic or this large in a high school.

“We want it to be an open facility,” said Palma. “It’s a beautiful facility, it’s gorgeous, it’s large and it’s 21st century and it’s here to provide opportunities for all students.”