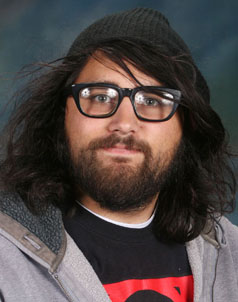 School technician Spencer Sands gets down and dirty as president of Garden Club.

On a Thursday afternoon, school technician Spencer Sands retreats to his garden after a hard day at work and surveys the blooming patch of land behind the art building. He decides to plant a new row of tomatoes, enjoying the feel of raw earth between his fingers and unfiltered sunlight on his face. His better-known image as school technology guru contrasts sharply with this one, but trading computer motherboards for squash was easy to do with the newly formed Garden Club.

"Gardening is one of my favorite things to do," he said. "I grew up in a rural area, where weekends were really devoted to yard work, so it's something I miss living in the valley."

This is Sands' third year at the school as a technician, though he is currently in pursuit of an elementary school teaching credential. His day-to-day job consists of helping to maintain all campus technology and fixing any blips that should arise—which they often do, according to Sands. He and Julie Grenier, the overall technology coordinator, are the two caretakers for the school's networks and technology.

"We do everything from fixing computers and setting up computers all the way to building up the school's wireless network and programming routers," said Grenier. "There's a lot of manual work, too. It's everything you could possibly think to do with technology."

Grenier is in charge of the programming aspect of the job, while Sands often takes care of the mechanical labor. Similar to the manual process of taking apart a computer to fix it, the maintenance of a flourishing garden requires much care and attention to minute detail. Sands acknowledges that the members of the club have to persevere to keep their garden beds in order.

"The kids water the gardens regularly," Sands said. "We collect the green waste from the cafeteria and use the compost accordingly as well. It's a lot of fun getting out there and moving dirt around."

The idea for the Garden Club blossomed last year between Sands and special education teacher Cabot Weaver. Conveniently, senior Carolyn Kobara approached Sands at the same time with a similar idea for the club, asking him to be the supervisor. Now president of the six-member club, Kobara is in charge of organizing the monthly meetings and maintaining the overall health of the garden.

"We're a pretty small club, but what we do is fun," said Kobara.

Sands had been inspired to start the club by Weaver's life lab special education classes held outdoors. He decided to integrate one of his personal hobbies into school life while simultaneously broadening the horizon of clubs for students.

"Not enough people know about it right now," Sands said. "We started it pretty recently and the PTSO gave us as grant to get us going, but I do hope it will expand. The more kids that are involved, the more people are willing to give us money to fund it."

As of now the garden consists of four beds: two for Weaver's classes and two for the club. With a second grant from the PTSO, the club aspires to enlarge not just club membership but garden dimensions as well.

"We want to plant some more trees, and a winter garden would be great," said Sands. "We had a lot of squash and other vegetables over the summer, and we gave them to the office staff that had to work in the summer. They really appreciated that."

Though gardening is one of Sands' favorite personal hobbies, he has a diverse palate of other interests as well.

"I play the bass and piano, though I can also play a bit of ukulele and trumpet," said Sands. "I started playing the bass in 7th grade and it just became something I love."

Additionally, Sands has a clear affinity for the outdoors, making it noteworthy that his actual job requires him to stay under a roof.

"I also love to surf and try to get out at least once a week," Sands said with a smile. "I like technology, don't get me wrong, but what can I say? I'm a man of many hobbies."