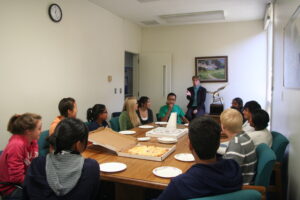 Students’ suggestive dance styles has been an issue for several years. However, concern over the problem heightened after the Homecoming dance in October, when several parents who had chaperoned the dance expressed their complaints.

Students’ suggestive dance styles has been an issue for several years. However, concern over the problem heightened after the Homecoming dance in October, when several parents who had chaperoned the dance expressed their complaints.

Assistant principal Karen Hyde is among those who hope to curb the trends of “freaking” and drinking. After taking a look at the way other schools in the area deal with such student behavior, she decided the administration needed to create a student task force to look at this and other issues.

“Homecoming was a definite impetus for us to take action,” said Hyde. “Parents who chaperoned the dance noticed a lot of crude behavior, which isn’t new to the rest of us, but it seemed to be a huge concern.”

Other issues aroused during Homecoming week caused the administration to look for a new approach in dealing with problems on campus such as racial stereotyping.

The task force will conduct surveys, analyze data and discuss solutions to issues.

“Do I think that we can eliminate freak dancing and other issues we have at this school? No. But, I definitely think that by changing up the way we do things around here, we can start an ongoing process that will bring about the side of the problems that we as administrators don’t see,” said Hyde.

The group will provide insight into students’ views that the ASB cannot obtain by itself. The task force will act as an advisory board to the administration but will not be a decision-making body.

Hyde looked for a diverse group of students to be a part of the task force to ensure a broad perspective and different ideas. She has chosen about 16 students of all grade levels to be involved.

“The ASB has tried to enact some type of student to student surveying and discussion board, but because of the numerous other responsibilities it maintains, that proved difficult,” said Hyde. “Thus, we created this task force, but we still want to keep a connection between it and ASB.”

“I’m pretty excited about this endeavor,” said Rateau. “It’ll bring new perspectives and help the school decide what the next step in dealing with problems should be.”

According to Rateau, because of the multitude of issues that the school needs to address, including stereotyping and misconceived notions, it will be beneficial to gather data on student opinions to figure out the truth and take action.

“I think that any opportunity for students to have a voice in these matters is important,” said Rateau. “Every decision the school makes affects someone, so having direct communication with students is crucial.”