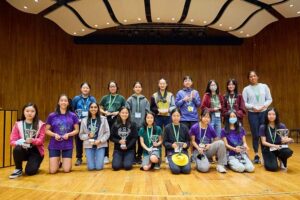 Photo by Ishani Agarwal
Winners who competed in the math competition received awards.

Permalink
The students placed top 20 out of the 250 other qualifiers at the annual Math Prize for Girls tournament.

Sophomore Ishani Agarwal felt an overwhelming wave of excitement as her name was announced during an award ceremony at MIT last month. She had placed third out of 250 contestants and received a grand prize of $7,000 at the 2022 edition of Math Prize for Girls, an international mathematics competition for middle and high school girls.

Remarkably, Agarwal and three other students — junior Victoria Hu and seniors Lisa Fung and Jennifer Xiao  — all finished in the top 20.

To qualify for the tournament, they had to receive a top 300 score relative to female competitors on the AMC 10 or 12, an annual nationwide math competition. After receiving an invitation, Agarwal, Hu, Fung, Xiao and other competing students traveled to the Massachusetts Institute of Technology (MIT) on Oct. 8 to attend informative sessions and campus tours, followed by an evening of introductions and icebreakers.

The contest occurred on Oct. 9, paired with an awards ceremony and a panel discussion between alumni and parents that discussed the alumni’s personal experiences and motivation in the study process, extracurriculars and college preparation.

Last year, the Math Prize for Girls tournaments were canceled due to COVID-19, and instead, virtual math talks and practice exams took place.

“I was really excited to go since in the last couple of years, Math Prize for Girls was canceled and the practice exams were hosted over Zoom,” Hu said. ”I was looking forward to having an in-person experience.”

To prepare for the in-person contest this year, many students chose to study previous years’ exams, as the nature of the questions are competition-specific. Each year, all 20 test questions are released as an online PDF for the general public to attempt. It’s rare for contestants to ace the test, with 19 out of 20 being the highest score in the competition’s 13-year history; this year’s top score winner managed a score of 17 out of 20 while Agarwal scored 12.

“At the end of the day, results don’t really matter,” Agarwal said. “The hard work that you put in prior to the competition is definitely the greatest reward.”