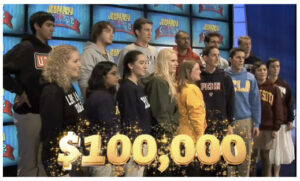 Ryan Stoffers is seen here wearing the UCLA sweatshirt along with the other 2010 College Jeopardy contestants.

Who is alumnus Ryan Stoffers?

If you tuned into Jeopardy on Feb. 1, you may have noticed a familiar face. Stoffers, now a sophomore mathematics/economics student at UCLA, got a shot at stardom when he became a contestant on College Jeopardy.

Who is alumnus Ryan Stoffers?

If you tuned into Jeopardy on Feb. 1, you may have noticed a familiar face. Stoffers, now a sophomore mathematics/economics student at UCLA, got a shot at stardom when he became a contestant on College Jeopardy.

College Jeopardy operates much like regular Jeopardy, with one contestant representing their college in a single elimination tournament. The winner of the tournament receives $100,000 as well as the person’s name on a trophy. Schools competing in the tournament include Alabama, Brown, Columbia, Dartmouth, Michigan, Minnesota, Missouri, Pennsylvania, Santa Clara, Yale and, of course, UCLA.

During the first round of the college tournament, Stoffers competed against Danny Vopava from the University of Wisconsin and Lyndsey Romick from Lewis and Clark College. Stoffers took the lead early in the game and finished in first with an impressive $20,311.

In the semi finals, Stoffers faced off against Dan D’Addario of Columbia University and Lindsay Eanet of University of Missouri. During Final Jeopardy, Stoffers was, again, the only one to give the right answer. He won $24,500, guaranteeing him a spot in the final round.

The finals of College Jeopardy, which consisted of two rounds, determined the winner of the tournament. Stoffer’s opponents were Surya Sabhapathy from University of Michigan and Nick Yozamp of Washington University in St. Louis. Despite solid scores on both days, Stoffers placed second behind Yozamp, winning $50,000.

In addition to being a talented contestant, Stoffers has been an avid follower of Jeopardy! for several years now.

“[Jeopardy’s] been on at 7 o’clock for as long as I can remember,” said Stoffers. “It became my favorite show around the beginning of high school.”

Stoffers got on the show by first taking a 50-question online test on the Jeopardy website in August. After scoring well, he was invited to an audition in November in LA. Then at the beginning of December, Stoffers received a call telling him he would be on the show.

“I was really excited when I got the call,” said Stoffers. “I called my friends and family right away to share the news. It was weird because I got the call at the beginning of December and the show wasn’t going to air until February.

But the work didn’t end there. Stoffers spent hours studying and quizzing himself to prepare himself for the intellectually grueling challenge.

“I prepared for the tournament by making flash cards of things that were easy to memorize and things that were my weaknesses,” said Stoffers. “I memorized a lot of world capitals, works of literature and their authors, and operas and their composers.”

On the day the show was filmed, Stoffers traveled to Sony Studios in Culver City. In addition to being a contestant, Stoffers was also able to enjoy meeting the show’s staff and crew, including host Alex Trebek.

“Everyone who works on the show is super nice and fun,” he said. “Alex Trebek was really cool. During commercials he walks over to the audience and answers questions. I know he’s probably heard them all a million times, but he still answers them with a smile and often a joke.”

All the hard work and preparation proved worthwhile in the end, as he performed at his best.

“The onstage experience was a ton of fun. It goes by in a flash,” said Stoffers, who signed an agreement not to reveal the results of the show in advance. “A fact that I learned in Mr. Sheehy’s U.S. History class came up, so I guess I would want to thank him for teaching me it.”

History teacher Jerry Sheehy, also a fan of Jeopardy, has trivia every Friday in his World History class and remembers how Stoffers always seemed to know the answer to every random question.
“Ryan was a genius,” said Sheehy. “He was just like a Jeopardy contestant, and he knows everything off the top of his head.”

“One fun thing was filming a promo telling people to take the online contestant test,” Stoffers said. “They wanted us to be goofy and over the top, which we all did. It’ll be embarrassing when it airs, but oh well.”