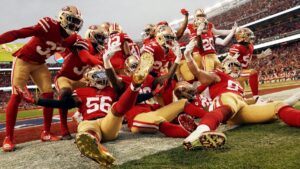 Photo by courtesy of Mattia Righetti
The 49ers defense celebrates a stop by posing in front of a camera.

Permalink
A midseason trade for running back Christian McCaffrey significantly improved the team’s championship odds and made their offense more formidable.

However, amid a barrage of changes the San Francisco 49ers did not make any big offseason transactions, but have still emerged as one of the league’s best teams — even though they’re starting third-string rookie quarterback Brock Purdy because of season-ending injuries to quarterback Jimmy Garropollo and Trey Lance.

Surprisingly, Purdy, the last player taken in the 2022 draft out of Iowa State, has been performing well, completing more than 70% of his passes in his first start, but his lack of experience makes his postseason performance hard to predict.

Likewise to Garropollo and Lance, Purdy has been hit with an injury to his oblique and ribs. If he is unable to suit up, quarterback Josh Johnson, recently claimed from Denver’s practice squad, will replace him as the starting quarterback. Additionally, all-pro wide receiver Deebo Samuel sprained his left ankle during the team’s most recent game against the Tampa Bay Buccaneers on Dec. 11. Luckily, both Samuel and Purdy are expected to play again before the postseason begins.

At this point, it looks as if the 49ers’ fate for this year’s Super Bowl lies in Purdy’s hands and in whether their key players can stay healthy. If Purdy and Samuel are cleared to play before they are ready, they could aggravate their injuries.

Despite the odds, the 9-4 Niners have an opportunity to build on their success from last season, where they made it to the NFC championship game, two wins away from a Super Bowl championship. So far this year, the 49ers’ strong play has once again made them one of the top contenders, and their main challengers for the Super Bowl look to include the Buffalo Bills, Kansas City Chiefs, Philadelphia Eagles and Minnesota Vikings.

The 49ers’ mid-season acquisition of all-pro running back Christian McCaffrey from the Carolina Panthers in exchange for three 2023 draft picks and one 2024 draft pick significantly boosts their championship odds, especially since they did not have to give up any of their current players.

Besides McCaffrey, their best offensive weapons include Samuel and all-pro tight end George Kittle. Currently, Samuel ranks 44th in yards from scrimmage out of all offensive players and Kittle ranks 8th in receiving yards per reception out of all the league’s tight ends. Samuel is also highly versatile and has all the necessary running back skills, totaling 228 yards on 41 carries over 13 games. He is expected to return by the end of the regular season or the playoffs.

The talent that the 49ers have on the offensive side of the ball makes them an elite in many dimensions. Their unit ranking reinforces this, as they are top 10 in the league in categories such as total yards per game and points per game.

The 49ers’ offensive line has also been key, and they are performing unexpectedly well after losing two all-pro offensive linemen, Laken Tomlinson and Alex Mack, in the offseason. As of Dec. 12, the unit has allowed only 23 sacks in the first 13 games, making them the seventh best team in that category, and allowed 33 quarterback knockdowns, ranking fifth in that category.

Although most NFL fans pay little attention to offensive lines, they are a key to the 49ers’ success, especially by giving the quarterback more time to throw during play-action plays and passing plays and giving running backs more room to run.

On the defensive side, the 49ers have been no slouch either. In their first nine games, the unit has given up the least total yards per game among the 32 defensive units in the league, making them one of the most intimidating defenses to face.

Despite being only 3-4 through their first seven games, the 49ers were able to bounce back and win their next six games in a row and now lead their division by two games. They are essentially a lock for the playoffs now, especially because of their surprisingly weak division.

One of their initial division rivals, the Los Angeles Rams, fell completely out of the division race with the loss of their all-pro wide receiver Cooper Kupp to an injury that sidelined him  — the Rams now stand at just 4-9.

The division rival who is far closer in win-loss record to the 49ers than the Rams is the Seattle Seahawks, who have a 7-6 record. However, they are also a non-threat because their defense gives up more total yards than the 49ers and the 49ers have superior offensive weapons. The 49ers have already beaten the Seahawks once this season back in week two and will face them again on Dec. 15. Given that the 49ers are clearly the more versatile team, they should win comfortably and win the season series against the Seahawks, giving them the advantage in a head to head tiebreaker.

Additionally, I do have confidence that the 49ers can take down the aforementioned other top championship contenders because of the noticeable flaws that they have.

Although the Chiefs beat the 49ers earlier this season and have proven to be a formidable foe, their defense is troublesome and could spell a recipe for disaster in the playoffs, as they have given up 22.9 points per game and 347 total yards per game. Their run game has not been phenomenal either, making quarterback Patrick Mahomes and tight end Travis Kelce carry the offense more.

Similarly, the Vikings have been one of the top teams in the league with a 10-3 record, but also struggle defensively. Although they do have many offensive weapons, their defense is inferior to the 49ers and they could see a decrease in success in the postseason. Typically, teams that qualify for the postseason have superior offenses compared to those who do not, making it more difficult for the Vikings defense to hold their ground in the postseason.

These are some of the teams that the 49ers will potentially have to go through to claim their sixth Lombardi trophy. Despite the team’s injuries and current quarterback situation, I am still confident the 49ers will go far in the postseason at the very least and compete well with the league’s best — with a Super Bowl remaining a real possibility.