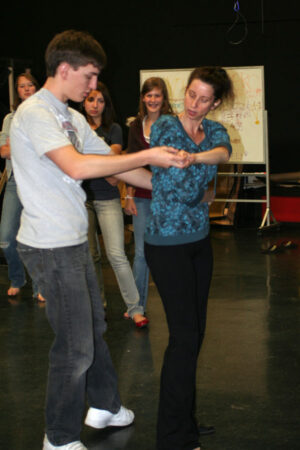 Other parts include Friar Lawrence being played by senior James Arroyo, and Tybalt played by junior Patrick Hawks. Sophomore Jay Lee, who has been cast as Mercutio, said that he looks forward to portraying the character and is ready to accept the challenge.

“I’m excited to play Mercutio because he’s such a unique character,” said Lee. “I mean, he can do pretty much whatever he wants and still get away with it.”

“Romeo and Juliet” is known for its opening fight scenes, and it is necessary for the scenes to be executed professionally but also safely said director Chris Mahle. Stage artist Monica Pease has been brought in to assist the actors with their combat scenes. Pease, currently working with City Lights Theater (CLT), has taken time out of her work on CLT’s current play to help out.

Besides the help of Pease, Mahle will be enlisting the help of English teacher Bill Peck. Peck, a former actor, will be helping students with their scene development and blocking. Peck said he looks forward to helping the kids out with understanding the Shakespearean verses.

“Romeo and Juliet” is set to open the week before Thanksgiving. Opening night is Nov. 20 in the McAfee Center with the play to be performed every evening throughout the week. The closing show will be a matinee on Nov. 23.