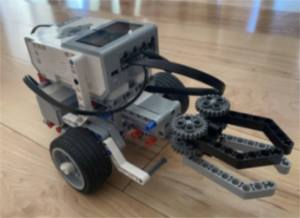 How can high schoolers help elementary school kids be prepared for the First Lego League (FLL) robotics competition in the fall, in spite of the coronavirus? That was the question juniors Kaaya Minocha and Arnav Bhola wrestled with this past summer.

They had to plan carefully; even during the school year, the M-SET robotics team’s outreach effort at Argonaut Elementary School was challenging, as the team had to cater to third, fourth and fifth graders of varying skill levels.

The program ran from mid-June to the beginning of August. Through a 30-minute Zoom call every Monday, Bhola and sophomore Mahati Kotamraju followed a detailed curriculum to teach lessons and assign homework to approximately 30 incoming fourth and fifth graders.

The curriculum, developed by all four, focused on basic software development using the Mindstorms EV3 software. The outreach team taught students about sensors, motors, variables and loops and helped the students code simple tasks, like using a touch sensor to hit all four walls of a box.

“It was definitely a challenge,” sophomore Druthi Palle said. “Students didn’t actually have access to a robot since the class was completely online, but despite that, they managed to learn a lot and pull through anyway.”

After each Zoom meeting, students submitted homework to either Bhola, Kotamraju, Minocha or Palle, who would then correct it and attach feedback. On Saturdays, students were expected to have finished their homework and come to another 30-minute Zoom session, where Minocha and Palle would go over common homework mistakes.

“Being able to present to the kids and have them ask questions was my favorite part of the program,” Palle said. “The feeling that the students are learning something and that you’re the one who’s responsible for that is really great.”

According to Minocha, the program went relatively smoothly, although issues regarding participation and homework were prevalent during the initial meetings. At first, students remained shy and didn’t interact unless called on, she said. On top of that, each student downloaded one of three different versions of the necessary software, which resulted in submission errors and version mismatches.

But these issues weren’t permanent. Mentors fixed software issues, and students gradually opened up and engaged in lectures, which Minocha said was “really gratifying.”

Mary Ko, president of Argonaut’s Parent Teacher Association (PTA), added that she had a positive experience with the mentoring program.

"The student volunteers were awesome,” Ko said. “They were very organized throughout the program in every way, from planning and preparation to execution. They were very well connected to the students, and I am so proud to have been a part of it."

In the future, the outreach team is considering hosting a similar event over winter break or next summer, Palle said. The team also plans to record videos covering the curriculum and upload them to YouTube in hopes of reaching a larger audience of students interested in FLL.

“We could only accommodate so many kids, but if we record videos, we’ll be able to connect with a lot more people,” Palle said. “We want to share what we’re teaching with people who didn’t get the opportunity to be a part of this program.”