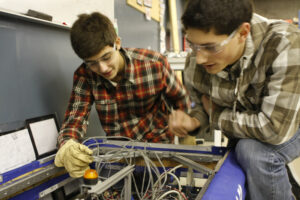 Although the current robotics team is only two years old, its members are confident and ready for the first part of FIRST Robotics Competition (FRC) on March 17 in Seattle. Doing well in the Seattle Regional will allow them to move onto the Silicon Valley Regional and eventually the FRC Championships.

Although the current robotics team is only two years old, its members are confident and ready for the first part of FIRST Robotics Competition (FRC) on March 17 in Seattle. Doing well in the Seattle Regional will allow them to move onto the Silicon Valley Regional and eventually the FRC Championships.

FRC is a national competition, with about 2,000 high school robotics teams competing to create two different robots in six weeks. The first robot was required to be sealed in a bag on Feb. 22 instead of being sent to the competition. This year, the goal of the competition is to have one of the robots pick up tubes and place them on a rack; teams are scored based on how many tubes they get on the rack. The goal of the other robot, called a mini-robot, is to climb poles. The mini-robot will be brought directly to the competition.

The robotics team, named M-SET for Mechanical Science and Engineering Team, gained funds to build the robots by asking companies such as NASA, Festo and Valin to sponsor them. They will also be withdrawing from these funds to be able to go to the FRC competitions.

Around 12 M-SET members will be going to Seattle to represent the team. Should the team advance from the Seattle Regional, they will move on to the Silicon Valley Regional, which occurs in San Jose from March 31 to April 2 and eventually to Championships which occurs in St. Louis from April 27 to 30.

Last year, M-SET won the Silicon Valley Regional competition as the third team in a team with Bellarmine College Preparatory and Monta Vista High School. Team Captain Senior Cordell Hollingsworth feels that they can do even better this year because of their gained experience. They do not expect to win Championships, but they do know that they will do well at the Seattle Regionals.

Last school year, Hollingsworth restarted the current robotics team after it had been shut down.

Because teams were only given a brief time slot of six weeks from when they learned what their robot was supposed to do until the bagging date, members found planning a vital part of their building process. Building the robot required both coordination and effort.

“During school weeks, we would meet from right after school to sometimes 8 or 9,” said sophomore Todd Nguyen, a member of M-SET. “When we had break, we would stay very, very late, so 11 to 11 was generally when we would work.”

Hollingsworth agrees that most of the obstacles came from procrastination. This year, M-SET has around 50 students, from freshmen to seniors.

“The hardest part in building the robot was getting the team to build it,” said Hollingsworth. “Getting everything coordinated was tough.”

In anticipation of FRC, members logged impressive hours in the robotics room on both school and vacation days. They honed their skills after building and programming robots, assigning tasks to members and sticking to schedules.

“Planning is pretty important because, basically, if you stick to your plan, everyone can get working at the same time since you know what it’s going to be in the end,” Nguyen said.

Along with planning, members were assigned specific parts of the robots to work on, as well as positions, such as programmer, builder or electrician. Many of the students’ parents act as adult mentors to help the students with their robot, but most of the work is done by students.

“I feel really good about this year. We definitely have a better robot, and last year we won the Silicon Valley Regional,” Hollingsworth said.