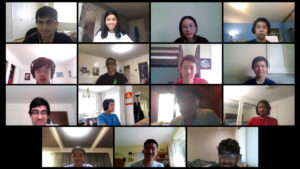 Robotics has been forced onto Zoom — again.

While adjusting to an online environment has been challenging for FRC team 649, they’ve been hard at work preparing for the new aspects of this year’s robot game.

Since in-person cohorts have been paused because of a surge in COVID-19 cases, MSET robotics team 649 has had to come up with creative solutions to virtually prepare for the robot game announced during the FIRST Robotics Competition (FRC) kickoff on Jan. 9.

Before cohorts were paused, students attended in-person training and worked on repairing past robots to gain technical skills. However, with cohorts being paused in December due to worsening conditions in the county, the team has not been able to work on the hardware aspects of their robot.

As a result, the team has partially turned to subsystem meetings, which are small group meetings, as one way to talk about their inability to work on hardware in preparation for their competition.

Led by FRC coach David Doluca, small groups discuss designs and strategies for different components of the robot: The hardware team focuses on designing different parts like a drivetrain or a belly pan using computer-aided design software such as SolidWorks in place of actual parts, while the software group writes code. When cohorts begin again, the team plans to use their detailed robot designs to quickly assemble their actual robot.

The subsystems for the robot consist of the shooter, drivetrain, intake, feeder and color wheel. Along with subsystem meetings, there have been weekly mandatory all-team Zoom meetings, where team members discuss strategy, organization and other topics that need input from all members.

MSET club adviser Sheeba Garg said the goal is to get students engaged in robotics even though they cannot meet in-person right now. Traditionally, students have used the low-pressure period of time before kickoff to build trust and teamwork, but this aspect of the club is much harder to foster given a lack of in-person cohorts, Garg said.

“When we were in the room, I got to know students really well and could guide them to a task that would be of interest to them,” she said. “Transitioning to a virtual environment doesn’t allow for the spontaneous discussions and ideas that you could have when in the same room.”

On the other hand, working online has allowed the team to better delegate subgroups and tasks, as well as focus on training sessions that they often aren’t able to find time for during a normal year.

According to Garg, the team has prioritized working on virtual competition submissions that don’t require a robot — such as the FRC Chairman’s Award, which measures a team’s outreach and impact on their community. This way, when students are eventually able to meet on campus, they can devote all their in-person time to working on the robot.

Students also used winter break by working on designs in order to be ready for design review meetings by the kick-off date, she said.

“The more we can finalize with respect to design, the better position we will be to make quick prototypes and test them once students can meet on campus,” Garg said.

As the season continues, teams will compete in at least one of the three virtual competition challenges to be eligible in-person. These challenges include the INFINITE RECHARGE at Home competition, the Game Design Challenge and the FIRST Innovation Challenge; MSET is still deciding which challenges to compete in.

The INFINITE RECHARGE game challenge typically involves teams of robots competing against each other on the same field. But with teams unable to compete in person, FIRST announced scoring and system changes during kickoff in order to transition the challenge to an online setting.

Most notably, teams will now record their robots completing the challenge alone, instead of the previous two-on-two in-person robot action. Teams would normally compete against other teams in the same region, but this year, teams will be matched randomly with a group of other teams from all over the world.

The Game Design Challenge is an opportunity for teams to design a game that could potentially be played by FIRST Robotics Competition teams. Each team is expected to develop as complete a game as possible, while at the same time creating a succinct written document or slide deck for judges to evaluate.

For the Innovation Challenge, teams will identify a real-world problem related to this season’s theme, FIRST GAME CHANGERS, powered by Star Wars. Teams will design a solution, build a business model and deliver a pitch to compete with other FIRST Robotics Competition teams for judged awards.

If COVID-19 restrictions ease up, however, teams might be able to compete in person with single-day competitions as opposed to the usual three-day competitions. There would be five to seven members per team allowed at the venue. The rest of the team will follow the competition’s live stream and contribute virtually.

While all these competitions are important, Garg said  her primary goal is still to make sure everyone is learning and engaged in the club.

“The goal is to help each student achieve their own personal goal,” Garg said. “We want to provide as much opportunity as realistically possible for our students to learn something new and have fun while developing a love for STEM.”