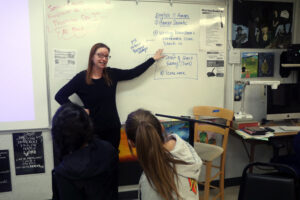 When English teacher Natasha Ritchie announced to her family that she planned to pursue a teaching career during her senior year in college, they clearly had been expecting it. Looking back, even Ritchie is surprised that she did not recognize her love for teaching earlier.

Growing up, she found the greatest enjoyment in reading. She recalls reading under an umbrella in the rain and overall acting like a “book nerd.” At the same time, she loved animals, idolizing Jane Goodall, an animal activist, and had read all of Goodall’s books by the age of 13.

With a mother who supported all of her different interests, Ritchie contemplated becoming an animal rights activist and writing books to bring awareness to the subject.

When she graduated from Saint Helena High in Napa County, her main interests were reading and animal care. But after the death of her first pet, she realized that she most likely was not emotionally resilient enough to become a veterinarian.

Her loose idea of her future did not hold her back in any way, and she proceeded to attend UC Santa Cruz without much pressure to choose a major. With its small school environment and proximity to the ocean, she said UCSC was the ideal choice for her and allowed her to explore different fields.

“I was lucky that I got to play around and didn’t have as much pressure to figure out what I wanted to be,” Ritchie said. “I started reading novels that were political science-focused or in other fields, making me realize that there were whole rooms of disciplines that I hadn’t ever explored.”

During her junior year, Ritchie was asked to become a teacher’s assistant in a class called Political Freedom. Ritchie recalls attending dinners at her professor’s house where the assistants would collaborate with each other and the professor, discussing the text and leading discussions.

“It was a tremendous experience,” Ritchie said. “Nothing had excited me more than being in charge of my own group of students for the first time for that particular job.”

After completing her undergraduate degree by doubling majoring in intensive legal studies and literature, she took a gap year to continue to be a paid teaching assistant, which she called the “best job ever” because it allowed her to retake her favorite courses while working with professors.

As a TA for a dozen classes, Ritchie graded all student papers and also wrote evaluations for students, which she said partially prepared her for writing many seniors’ recommendation letters. Her time at UCSC also allowed her to realize that being a professor was not the best fit for her because of the disconnect between student and instructor.

While she debated on attending law school to teach in subjects such as political theory, she eventually recognized that she most enjoyed the one-on-one interactions between teachers and students, which would be greatest in a high school environment.

Once she earned her teaching credential, Ritchie took her first teaching job at Scotts Valley High School in 2004. This was a challenging assignment since the school was a relatively new and was in a financially challenged district that didn’t pay teachers well and had constant turnover. Ritchie taught there for two years but began looking for a better job and situation.

From her experience there, she recognized the importance of a school district that “practiced mutual respect among all staff.” In 2006, she was hired at Saratoga High.

At the start of her teaching career, Ritchie found the shift to planning her own curriculum to be drastically different from forming lesson plans to complement a professor.

“It falls to the teacher to create material that has real value and to create a classroom environment that fosters engagement and support,” Ritchie said. “I learned early on that students are more likely to get more out of a class if they can relate to or at least respect the teacher.”

Throughout her 14 years as a high school teacher, Ritchie has strived to provide an ideal learning environment for every student. In 2016, she was named teacher of the year by the SHS staff.

“I always try to find the balance of helping students learn skills but also having learning not be a chore,” Ritchie said. “I work to provide a balance where learning is done for the student and for learning's sake, and not necessarily just because you’re supposed to.”