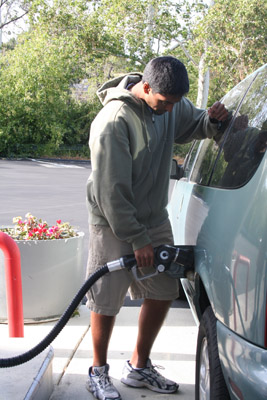 Senior Sidhant Kanchan fills his tank with gas. He has cut down on his driving because of expensive gas prices.

Senior Andrew Chang recently found out that his bank account held just 22 cents. He blames raising gas prices as a big reason for his lack of money because every fill-up is “$30 down the drain.”

Like many students, he has had to change habits as prices rise to $3.75 a gallon or higher.

At the beginning of the school year, prices were averaging around $3.20.

With this in mind, he is planning to resume his last summer job as a private swimming tutor in his backyard.

“Now I usually prefer staying on campus for lunch and eat prepared lunch from home that is healthier.”

His family has three available cars for him to drive, and now he takes one car until the gas runs out and skips to the next car until he can pay for the gas.

In addition, he stays on campus at lunch more often and eats food from home.

“Now that I’m out of money, gas is a bigger problem than ever because that means I can’t get to places that I need to be,” said Chang. “Sometimes I ask my parents to drive me around, like when I was a freshman, but they’ve gotten used to me driving myself and so sometimes they don’t have time to drive me.”

Senior Sidhant Kanchan also deals with this problem every day.

“I try to get a ride from other people as much as possible,” said Kanchan. “I live close enough to walk [to school], so I just usually walk home if I’m not able to get a ride home.”

When he really needs to get somewhere, his parents usually give him a ride. Otherwise, he gets an allowance of $25 a week for everything, including off-campus lunches and gas.

“I usually make lunches at home, many times sandwiches, so I don’t need to pay for more expensive outside lunch,” said Kanchan.
He never fills up his gas tank all the way, so he doesn’t know how much filling his entire tank costs.

In addition, his car only works on premium gas, which makes things even more expensive for him.

“I drive as little as possible during the week, and if I have extra money at the end of the week, then I go fill up gas,” said Kanchan.