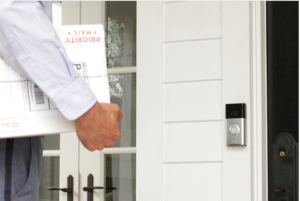 In response to the recent increase of burglaries in Saratoga, city councilman Rishi Kumar is trying to make sure residents are using an effective tool.

In response to the recent increase of burglaries in Saratoga, city councilman Rishi Kumar has negotiated a deal with home security company Ring to provide all residents with a heavily discounted “smart doorbell.”

According to Kumar’s website, an approximated $2 million was stolen from Saratoga homes this year. As a result, Kumar  has initiated weekly neighborhood meetings at residents’ homes throughout the Golden Triangle neighborhood in order to better inform residents of the situation.

It was during one such meeting that Kumar realized how deterrents, such as cameras and surveillance systems, could be strategically placed to prevent break-ins.

“Given that the thieves typically want to make sure no one is home before they break in, and that they have to ring the doorbell to confirm presence,” Kumar said, “I thought, why not take that first step away by placing a monitoring tool at the front door? Thus emerged the idea of a Ring doorbell outside every Saratoga door.”

Many residents have taken advantage of the offering, investing in the $139 smart doorbells (typically priced at $199) in hopes of protecting their homes and valuables. The doorbell has a camera that records cloud-accessible footage and offers hypersensitive motion detection.

“It lets [my family and me] see who comes to the door and also alerts us as they’re approaching,” sophomore Thomas Lim said. “It’s very convenient to use since you can see whoever’s at your door and is much more high quality than other smart doorbells my family and I have had.”

As a result of Kumar’s initiative, a committee of Saratoga citizens is now looking at getting similar deals on other home surveillance products such as alarm systems and smart door locks.

Although it is difficult to measure the effectiveness of such measures, Kumar said he thinks the doorbells will be a successful deterrent.

“These Silicon Valley thieves are quite smart with their modus operandi,”  Kumar said. “If they see a home that has many deterrents in place and a home that does not, they will likely target the home that is easy to break into and not get caught.”

Kumar initiated talks with Ring’s CEO, Jamie Siminoff in order to pitch the viability of the discount on Ring doorbells in every Saratoga home. He mentioned Saratoga’s “semi-rural charm” and the city’s abundance of Silicon Valley executives.

Kumar said that he has not heard of a home break-in yet in which a Ring doorbell is installed.