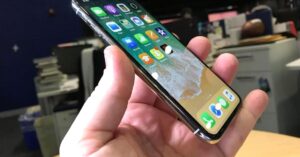 I’ve never been a fanatic for new technology, but if there’s one thing I know, it’s phones.

For the current young generation, phones have become both the most useful and most time-wasting devices in existence. Everyone’s always looking for a better phone, but with so many complicated options, it’s become difficult for us to know what we should upgrade to next.

Then I watched the replay of the Apple presentation unveiling the iPhone X. I knew immediately I had to upgrade after several years of waiting with an iPhone 5S.

Of course, one large aspect of the phone was the hype even before its release. Because of the whopping price tag of $1,000 and radical design shift from previous phones, the iPhone X took center stage in mainstream technology media. In fact, it’s become hyped as potentially one of the best new tech items from multiple tech news sources, such as The Verge. Still, I wanted to find this out on my own.

I’ve now used it for about three weeks, and have learned a lot about it through daily usage.

The elephant in the room everyone’s been arguing about is the implementation of Face ID as a replacement for Touch ID. I have to say: I prefer Face ID wholeheartedly. While Touch ID is often disrupted by factors like moisture on the button and pressure applied, Face ID works slightly slower but is far more accurate and reliable.

Touch ID on my iPhone 5S unlocked my phone about two out of three times, and I wasn’t sure why it worked or didn’t work. In comparison, Face ID,  which uses an infrared dot projector on the user’s face works about nine out of 10 times and has very recognizable instances in which it won’t work. For example, if your head is at too extreme of an angle from the face of the phone, it most likely will not unlock.

Another complication is speed. Although I’ve found out from other reviewers and other tech spec analysis articles that the A11 Bionic processor is the best ever created for a smartphone, I don’t really notice the insane speed. Honestly, it just feels like any other smartphone. Switching apps feels smooth, and there’s never really stutter.

With a dual self-stabilizing 8 megapixel back camera and another single 8 megapixel front-facing camera, the iPhone X has stunning image quality. The new portrait mode, which is powered by the A11 processor, also works surprisingly well. Lighting is adjusted expertly and hardly any effort is needed to take beautiful images.

Finally, the exterior of the phone impresses.

Build quality, like on most iPhones, is solid. The new stainless steel band frame feels extremely smooth to hold, especially on the space gray model, which has an extra layer of protective coating to prevent the stainless steel from scratching. In addition, the tiny bezel allows the phone to be only barely larger than an iPhone 8 while retaining a far larger screen size.

The screen is just as good as the ones on previous iPhones, if not better. Although the notch on the top edge of the phone is a little obnoxious, the high color accuracy and edge-to-edge display makes up for it. Apple’s first venture into building OLED-screened devices has been a success. Unlike Google’s new Pixel 2 XL, Apple sourced its screens from Samsung rather than LG, preventing issues like screen burn-in, which Google is struggling to fix.

Other miscellaneous features, like notifications on the lock screen being hidden until Face ID recognizes that you’ve looked at your phone, are nice quality-of-life improvements.

Apple really won with this upgrade — the company held nothing back. The price tag, though unprecedently high, is likely not enough to stop Apple fans from buying this phone, especially with the magnitude of changes Apple has made. It might not fit into everyone’s budgets, but for those who can afford it, the iPhone X is one of the best options for a new smartphone this year.