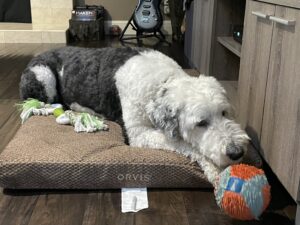 My dog, Emmett, with his Chuckit! indoor ball

Dogs love chasing and playing with balls. I’m not quite sure why, but any type of ball fascinates them beyond belief. Just look at my dog, Emmett. If you put a ball in front of his face, he’ll forget about everything else going on around him.

Emmet is a sheepadoodle — half sheepdog and half poodle. He’s 5 years old and loves to run around my yard, pounce on his toys and beg for food when he’s not supposed to. If you ask my family, we would say he’s the best dog in the world.

But like most dogs, he’s not very smart. A prime example of this is how he shoves his toy balls underneath our furniture, only to cry when he can’t get it out. As you might predict, it gets frustrating to keep getting up from your seat to rescue your dog’s toys. So for Christmas, we got him a new ball that made both him and my family happy: the Chuckit! indoor ball.

At face value, it looks like just another dog toy. But this ball has so much more to offer. At 4.7 inches in diameter, it’s large enough to prevent itself from rolling under furniture while also small enough to play with inside the house. It’s softer and made with a yarn-type material, making it indoor-friendly and not a threat to your floors and furniture. It’s also compatible with other Chuckit! products like the indoor ball launcher.

Emmett can’t talk or express his feelings, but I believe the Chuckit! ball is one of his favorite toys ever. He grabs it in his mouth and trots around the house with it all the time. He throws and bounces it around with glee. He sometimes even puts it on his little bed and sleeps with it.

Of course, Emmett still tries to shove it under furniture. Occasionally he’s successful, but most of the time, he’s spared the despair of losing his toy, and I’m spared having to get up from a comfortable spot on the couch.

The Chuckit! ball has truly saved my family so many annoying situations, and at $7.09 on Petco.com, it’s a steal.

If you have a dog and you don’t have this ball, you’re missing out. I highly recommend that all families with medium-sized dogs get this ball — you won’t regret it!