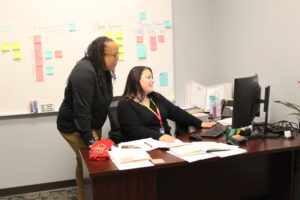 Permalink
Tanya De la Cruz said her goal is to increase accessibility of school news and information, including updating websites and the delivery of timely information.

When superintendent Bill Sanderson joined the district in the summer, he met with the mayors of Saratoga and Los Gatos along with other community partners to discuss their perspectives on the biggest needs of the district. The common answer was the need for better communication — community members often had little knowledge of what was happening within the schools.

As a result, a brand new job position opened over the summer in the district: a public information officer (PIO). The duty of the PIO is to create clear and concise communication between the district’s schools and surrounding areas, with a hope to foster stronger community relationships.

Tanya De la Cruz, the district’s first PIO, has 12 years of experience in the same role at Moreland School District (MSD). Due to MSD being a K8 school, De la Cruz decided it was time for a change of pace and switched to LGSUHSD to learn more about high schools.

Because of the general unfamiliarity of her new job and recent changes in the district board, her biggest challenge is familiarizing herself with everybody and what they do and getting staff and students to communicate with her about current events.

“My job doesn’t exist unless people tell me what’s happening, and they don’t know to do that yet,” she said.

Despite the tough task of leaving her previous job and taking on a newly opened position in a different district, De la Cruz is enthusiastic and readily anticipating the challenges to come.

“I really like the idea [of a brand new position], it gave me the opportunity to start from the ground,” De la Cruz said.

In her previous district, she received numerous calls from real estate agents inquiring information about the school for people moving into the area. She hopes to be able to do the same for our district, and “shout from the mountaintops” all the stories and accomplishments that are unknown to the community.

De la Cruz’s immediate goal for the year is to improve the district’s website to make all current information easily accessible and up to date, noting that much is buried, old or not updated in a timely manner. She is hopeful to have a brand-new website that will be launched after February or spring break. Afterward, she plans to work on the individual school websites over the summer.

Additionally, she seeks to increase media coverage of the two schools and has already reached out to various news sources, developing connections with places such as the Saratoga News and Mercury News and continuously feeding them information. Being an avid participant in journalism throughout her academic career, she especially recognizes the importance of press releases.

Keeping to her promise, De la Cruz has been regularly emailing press releases to students and parents about notable happenings and achievements at both schools, something the district has not done regularly in the past.

“I just really want to be able to tell the stories of the amazing things that are happening throughout the district,” De la Cruz said. “And I think the community wants to know.”