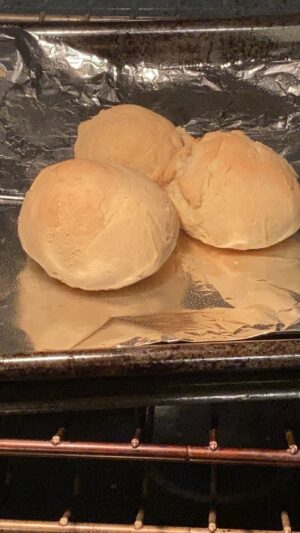 I love cooking. The sounds of a sizzling steak in a pan and soup bubbling in a stock pot are a euphonious symphony to my ears. What makes cooking so fun to me is the freedom that comes with it — adjusting the seasoning as I see fit and being able to move pans on and off the fire in order to adjust the heat.

Baking, by contrast, is an activity that I abhor. I’ve never understood why so many people like it so much. Whenever I bake, I always feel as if I have no control over what I’m doing — I just toss things in a bowl, stick everything in the oven and then pray that the baking gods have mercy on my soul. They usually don’t. Even when I try to follow the recipe perfectly, it doesn’t work out.

So when a friend challenged me to a recipe-less baking challenge — making a loaf of bread — my first reaction was to say no. But as I thought about it, maybe the problem was that I followed the baking recipes too closely. What if I just applied my cooking philosophy of freedom to baking?

Before I began, I had to navigate the confusing list of ingredients that normally go into bread. Flour, butter, milk, yeast, salt, sugar … eggs? I wasn’t sure if bread normally contained eggs. But this was a recipe-less bake. Who cares if bread normally has eggs? My bread was going to have eggs. In fact, I decided it was going to have two eggs. I also noticed that our pantry had approximately 80 types of flour — cake flour, all purpose flour, wheat flour, self rising flour, the list went on.

After finally figuring out all the ingredients and laying them next to a big bowl on the kitchen counter, I realized that I had no idea what the ratios of ingredients should be to each other.

I decided not to get too caught up in the technicalities of bread baking. Remembering that yeast normally needs activating, I warmed a glass of milk and put a pinch of yeast into the milk to sit and do its yeasty thing. Then, I ran into the first major challenge of the bake. How much butter? I paused for a second, trying to figure out the answer, before I came to the conclusion that it didn’t matter! The more the better, I told myself, as I tossed a stick into the mix.

As I stuck my hands in to combine the mixture of ingredients, I found that the dough was too gloopy. In a stroke of genius, I realized that adding more flour would make the dough drier. But sadly, I eyeballed the amount of flour I added incorrectly: Suddenly, the dough was way too dry. Realizing my mistake, I desperately poured a glug of milk into the dough. Tragically, it was 0.8 glugs too much. The dough only needed 0.2 glugs of milk.

Eventually, after several back and forths of adding too much flour and then too much milk, I finally began kneading the dough on a board. At some point, I found a rhythm in my kneading — it was actually quite relaxing.

I clicked the “start” button on my oven, and put my lump of dough in. I didn’t know what temperature and for how long my bread was supposed to bake at, so I ended up just setting the temperature to the oven’s default setting — 350 F.

Ultimately, I don’t think what came out of the oven can even be called bread. Though it was edible, I think it could be best described as a bland scone. But hey, I never said I was baking bread in the first place.

Though my baking adventures haven’t taught me much more about baking other than that I am bad at it, I relearned an important lesson: Sometimes, ignorance is bliss. I had no clue what I was doing, but I did have a lot of fun.