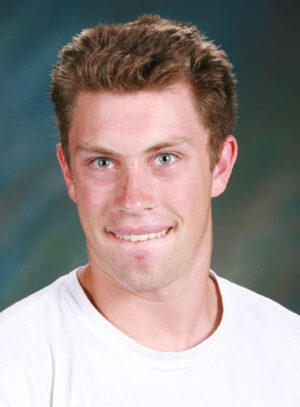 While senior Chris Guengerich may be known for his stellar athletic ability on the football field, leadership as a captain, and success as wide receiver on the football team, Guengerich has also developed a reputation as a stellar student in the classroom. Guengerich was recently recognized by the San Francisco 49ers for both his achievements as an athlete and his academic accomplishments through recognition as the San Francisco 49ers High School Player of the Week for Week Five.

“Coach [Tim] Lugo told me about the award during practice, with all the whole team huddled up around,” said Guengerich. “I didn’t even know about it. I was pretty excited, but I didn’t really know how prestigious it was at first. I went home and I found out about the award and was pretty happy.”

Guengerich has not only managed to balance his time commitments between football and rigorous academic schedule, but also managed to excel at both. Guengerich boasts a 4.2 GPA and is currently being recruited to play football several top-notch schools including The University of San Diego, Penn, Cornell, Brown and Princeton.

Guengerich, a two-time all-league receiver, finished his last season ranked second in the league in receiving, with 55 catches for over 750 yards and nine touchdowns. Guengerich attributed his success to senior quarterback Kevin Smith, as well as to the rest of the team.

Guengerich was perhaps Smith’s favorite target during the season, as Guengerich led the team in catches.

“He is a really easy target to throw to because he gets off the line quickly, and runs his routes extremely well and crisp,” said Smith, who has been playing with Guengerich for seven years. “He was always open, so it was great playing with him.”

For his efforts, Guengerich will receive a 49ers hat and T-shirt, a certificate signed by 49ers coach Mike Singletary and two tickets to a 49ers home game. Additionally, at the end of the season, he will be invited to receive a trophy at the 49ers training facility. Lugo also received a $500 grant for his football program.

“I don’t know how much [the honor] will influence my recruitment for football, but I just listed it as an award on my college applications,” said Guengerich. “Hopefully, it will help me get into my top choices.”