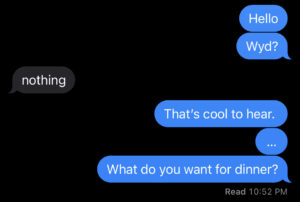 Photo by Minsui Tang
Getting left on read, or as some call it, donowalled, is a damaging experience that frankly doesn’t need to exist.

Active listening: A skill taught in multiple advisory modules to make people feel heard, understood and connected to. In one-on-one conversations or even a group setting, actively listening to a speaker is a sign of respect.

Texting, however, isn’t this simple.

“Left on read” is a familiar phrase for most teens and young adults. Typically, it is used when a person is complaining about their crush ignoring their messages. After all, the person took the time to open their messaging app, looked at the message and chose not to respond. In the mind of the sender, they’re talking to a wall at that point.

From the recipient’s perspective, things can be quite different.

Picture this: They see a message from someone they want to talk to and open it to read it, but as they start to reply, their mom comes in and tells them they need to set the table, so they have to leave before they can respond.

Because of the dreaded “Read” under the message, there’s an anxious teenage girl setting the table as fast as she can to reply quickly so it doesn’t seem like she’s ignoring her boyfriend, and there’s an equally anxious teenage boy lying on his bed with a sick feeling in his gut, wondering why he’s being ignored.

It’s a situation that most people will face in the age of instant messaging apps that puts practically everyone on edge. The one-word responses that are seen as respectful in face-to-face communication are unnecessary in the world of iMessage, Messenger and Snapchat.

Read receipts make people uncomfortable, anxious and can even lead to issues in relationships where being too busy to reply isn’t acceptable. They magnify insecurities while adding little value to a conversation.

That said, turning read receipts off is an equally bad idea: Disabling them makes someone look like they prefer to “ghost” people they’re talking to, or like they’re disconnected from conversations.

So what is the solution? Since time machines are at least a few years out, there isn’t much anyone can do about the damage done by texts that aren’t responded to, but perhaps a different mindset can help alleviate some anxiety. Maybe that person didn’t leave you on “read” just to avoid you, but instead they’re busy and feel secure enough with your relationship to know that a slow response won’t push you away.