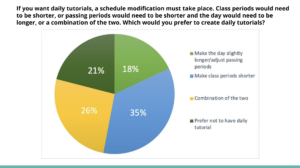 Permalink
Stakeholders find issues in all three proposed bell schedules and discuss what they hope to see in the final decision.

During the district’s board meeting’s study session on Nov. 16, associate superintendent Carrie Bosco presented six bell schedules proposals for the school board to consider for second semester.

With consideration to the feedback from a district-wide survey sent to students, parents and staff, the five-member governing board chose schedule three drafts (A, C and F) as their favorites. The district will use the board’s feedback to create a master schedule they hope to announce and approve at the next board meeting on Dec. 14 at Los Gatos High School.

The second option (Draft C) features 88-minute classes, 8-minute passing periods and inconsistent start times; there are daily tutorials that are 30 minutes on Red Days and 37 minutes on Blue Days. It ends at 3:55 p.m. on Red Days, and 2:31 p.m. on Blue Days.

However, even if a particular schedule is approved, any bell schedule that extends the end of the school day past 3:45 p.m. will require approval of the District Teachers Association (DTA), which is currently engaged in negotiations with the district over teacher compensation. DTA approval is not guaranteed, and it’s possible there could be no schedule change at the semester. DTA president Amy Obenour declined to comment about the situation.

Because many students here have 7th periods, a change to the end of the day would affect them.

“I don’t want [my class] to interfere with going to practice or [force me] to ditch class for a soccer game,” Lim said. “The earlier school can end, the better.”

“I can see why it would be hard for people with a seventh period, but given how much I personally benefit from tutorials, I think it’s necessary to have them every day,” Wong said.

More than anything, Wong prefers having a schedule that has consistent break, lunch and class start times. She said having her last period of the day end at different times has been difficult to keep track of, despite it being months into the school year.

Both Lim and Wong said they prefer the pre-pandemic 2019-2020 school year’s bell schedule in which school started at 8:15 a.m., ended no later than 3:45 p.m. and had a daily tutorial. But this schedule poses issues due to a new California law starting in the 2022-2023 school year that requires all public high schools to start no earlier than 8:30 a.m. If the school returned to the pre-pandemic bell schedule, a new bell schedule would need to be created for next year.

English 11 teacher Natasha Ritchie, a member of the first bell schedule committee that was created five years ago, has been disappointed with the handling of the district’s discussions. For one, she believes that the school’s leadership committee would have liked to be able to voice students and teachers’ consensus that they were — and still aren’t — willing for school to go beyond 3:45 p.m., she said.

“We’ve [already] done this process,” Ritchie said. “So I’m distressed that we’re once again talking about pushing it beyond that.”

Ritchie said she would not support any schedule that went past 3:45 p.m. She expects the DTA to shoot down any later schedule, especially given the ongoing teacher compensation negotiations that makes it unfair and “bad timing” to ask teachers to extend their work days.

Apart from the ending time, she prioritizes daily tutorials, even if that means having 85-minute class periods. While she was initially open to the idea of having a tutorial every other day, she’s since recognized how challenging it is to not be able to communicate with students on a daily basis.

“Especially with the addition of advisory lessons, I find it to be just like a carnival, trying to figure out how to see everyone and help everyone,” Ritchie said.

However, she said she likes the 15-minute break after tutorial; in previous schedules, helping students during tutorials meant that teachers didn’t get a substantial break between classes.

Ritchie also made it clear that she would not be supportive of the addition of weekly advisories, an idea floated by the board should daily tutorials be implemented.

“I think that would be absurd. It was always my recommendation that we have one advisory per month, and we do it really well,” she said. “We need to just be really, super thoughtful about advisory. Do a few well.”

Another controversial issue for the board is consistency between the two schools: The 10-minute passing periods essential to the larger campus at Los Gatos High School causes unnecessary dead time at Saratoga High.

Ritchie believes that because of how different the two schools are, the schedules don’t need to be the same.

“I’ve always been a proponent of [different schedules between campuses],” Ritchie said. “I get that because of rolling block, we should have comparable schedules, but I don’t think the exact minutes need to be the same.”

As Ritchie and others await for the district’s decision on the new bell schedule, she hopes they will listen to the priorities expressed by teachers and students.

“Engage all stakeholders,” she said. “Don’t make decisions based on what they personally think is best.”