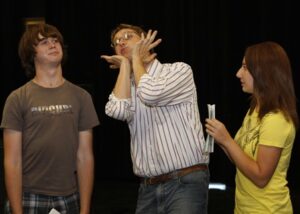 Students rehearse for the fall play, "On The Razzle," which premieres on Thursday, Oct. 22, in the McAfee Center.

Grueling hours of rehearsal will finally pay off this weekend as the drama department showcases its fall play “On the Razzle” in the McAfee Center. Thursday night’s opening was the first of four continuing with evening shows this Friday and Saturday at 7:30 p.m., and a Sunday matinée performance at 2 p.m.

“I love and hate the last two weeks leading up to Opening Night. Most of the time it feels like it will never work out, but things start to happen [as I] turn the show over to the cast and crew entirely,” said director Chris Mahle. “Then, the hardest part of the job is just sitting back and letting the kids do their thing.”

The production is a Farce in two acts and tells the story of two clerks, Christopher and Weinberl (senior Chris Renalds and junior Jaemyeong Lee respectively), who use their boss (senior Tommy Mednick) Herr Zangler’s absence as an excuse to run off and seek out adventure in Vienna.

Of course, they manage to blunder into plenty of mischief along the way. Cross dressing, mistaken identities and impostors are very much the norm in this comed. Every role has its own idiosyncrasy, whether it is an overly redundant catchphrase, a manner of misspeaking or an obsession with a certain body part.

“Once past the stage of simply memorizing their lines, actors can make the scene funnier with their own quirks,” said Mahle.

Stage kissing is at an all-time high in “On the Razzle,” with as many as three couples locking lips during the show. This has been a novelty for all six participating actors, making the rehearsal process all the more amusing for the remaining cast members.

“It’s always funny and awkward during rehearsal, with everyone watching and laughing,” said junior Mikaela Burton, who plays Lisette, the French maid. “However, it does get better because you get used to it so it’s not as big a deal anymore.”

Mahle pushed the actors (literally, in some cases) to embrace their roles fully from the very beginning, making for a smoother transition to make the relationships seem more real.

The cast say they look forward to sharing this production with family and friends. They hope the audience will catch all of the hidden humor.

“[‘On the Razzle’] has so many hilarious jokes,” said Renalds. “I think it is really great that Saratoga drama has the talent to pull all of them off.”