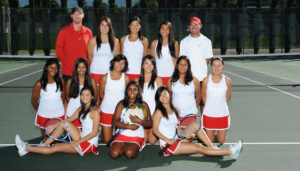 Rain has twice wiped out matches in the NorCal tennis tournament, making this one of the longest seasons ever.

The still undefeated girls’ tennis team seems a good bet to beat anyone but the weather this year.

Rain began to fall as players began their matches against Monta Vista on Dec. 2 afternoon in the finals of the CIF NorCal Championships in Walnut Creek, postponed from nearly two weeks before. Most of the girls only finished the first game of the first set before the referee called the players off the courts.

The day was not unproductive, however, for the team managed to win 6-1 over Redwood High School in the semifinal round, the same team it also beat 6-1 in the second round of the Fresno Peachtree tournament in September. With usual No. 1 doubles player junior Lisa Asai away on a scheduled trip, sophomore Evaline Ju filled her spot to play alongside junior Sarah Lum, and senior Lauren Kuan stepped in to play at the No. 3 doubles position with junior Tiffany Tu.

Both new teams won their matches. Freshman No. 4 singles player Kalyani Narayan closed out a close 7-6 match against her Redwood opponent.

The final match agaist the Matadors has been postponed yet again to Dec. 9 at Courtside in Los Gatos. Junior Crystal Yen will be playing in the CCS Individuals tournament on Dec. 6.