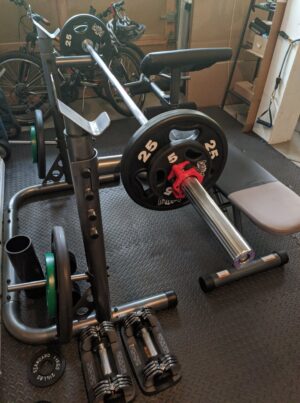 Students encourage others to exercise at home in a period we most need it.

Junior Marcus Kuo heaved a sigh of relief as he hoisted his barbell atop the rack. After hours of hard work with his family, he had finished assembling a garage home gym.

Now, although Kuo said he is disappointed that in-person practices and games won’t be happening as usual, he is glad that all of his effort has paid off. Using the home gym has not only helped him get stronger but also motivated him to work out each morning.

“Creating the home gym allowed me to stay active,” Kuo said. “I want to stay in shape and get stronger, so when we return to sports, I can compete at a higher level.”

The gym has a squat rack with a barbell and plates along with a bench. Since he already had a few dumbbells and resistance bands, Kuo is now able to do most exercises he could in a full-scale gym. He plans on continuing to use his home gym even after the shelter-in-place order is lifted and practices and games resume.

Senior Jason Chin, a national-level fencer, also set up a workout routine for himself in hopes of staying competitive in fencing after quarantine.

Chin customized his garage workout area to suit his specific needs as a fencer. He set up a target board against a wall as well as non-slip mats for proper footwork to perform all of the drills he did in typical practices.

“During practices, I sweat all over the place, and my coaches make me mop the floor after practice,” Chin said.

Chin has maintained this intensity despite the awkwardness of working out over Zoom, due not only to his desire to remain a strong competitor but also to his regard for working out just as a part of his daily routine rather than as a source of exercise.

“Honestly, even without fencing, I would still continue exercising — especially weightlifting,” Chin said. “The only thing that stops me from exercising is injuries.”

Junior Glenn Liang has also used the tools available in his home — dumbbells and a power tower (consisting of a pull up bar, dip station and captain’s chair) — to exercise. Liang now does push-ups, pull-ups, squats, dips and rows five days a week rather than his pre-quarantine three.

“It’s really cool to see the progress you’ve made,” Liang said. “Immediately after exercising, I feel happier and less stressed. It also made me feel more comfortable about myself. It’s the best free medicine.”

After trying out different workout schedules throughout quarantine, Kuo said he found working out before school, rather than in the afternoon, made it much easier for himself to stay motivated.  He suggests moving workouts sessions to mornings, before school starts.

Chin has additional advice for people who have tried exercising but lost motivation.

“Results won’t come immediately, and I know it’s frustrating,” he said, “but it’s the ones who really commit and push through who see actual results and progress.”