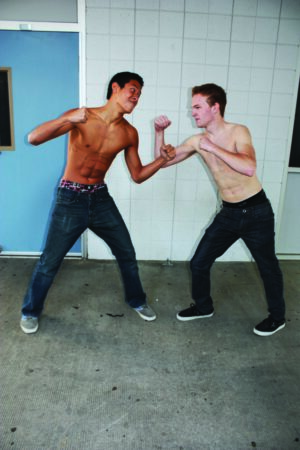 Halloween costumes can be a difficult ordeal, especially if you have just decided to go trick-or-treating with your friends. Sometimes, you might not even have time to go shopping for a costume. So here are eight low-hassle costumes for everyone to enjoy.

Halloween costumes can be a difficult ordeal, especially if you have just decided to go trick-or-treating with your friends. Sometimes, you might not even have time to go shopping for a costume. So here are eight low-hassle costumes for everyone to enjoy.

Puritan-style: Nothing’s wrong with recycling a U.S. History simulation costume, right? Just dig out whatever you wore for those, and be a pilgrim. American pride! If you’re a freshman or sophomore, you might as well scrounge something up, because you will be needing a Puritan costume junior year!

Harry Potter: Harry Potter and the Deathly Hallows is still a good 21 days away, but everyone loves a good Harry Potter costume. Go look around for those 3-D glasses from all those movies and take out the lenses, draw a lightning bolt on your forehead with a black marker and find a tree branch from your backyard to use as a wand. You’re all set! Memorize some spells to yell out while you’re at it.

Easy A: Want to be an English fanatic? Stick a red letter “A” on your shirt and carry a baby doll. Pick up a copy of “Scarlet Letter” just in case some people don’t get it. If you are a junior, try going to your English teacher to rack up some more extra credit points. With all that time spent partying on Halloween, you know you’re going to need some.

Twilight (Boys): Now, you can either pick Taylor Lautner or Edward Pattinson, but both are pretty low-hassle. If you’re going for the “Jacob Black” look, just go trick-or-treating shirtless and draw a six-pack with a marker… or something. If you want to be “Edward Cullen,” just throw some sparkly glitter on yourself and be creepily protective over a girl. The adults might not get it, but the pre-teens definitely will!

Dorothy (Girls): Dig out a nice skirt, some red heels and that stuffed dog you haven’t touched since you were 8 . Toto, I’ve a feeling we’re not in Kansas anymore!

Blackmail: Dress up in all black and stick a postage stamp somewhere on yourself. Feel free to act mean throughout the day.

Mummification: Find those extra rolls of toilet paper in your bathroom and go to town with them! Use some tape to be an even more legitimate mummy. If you lose part of your costume throughout the day, just find a bathroom and borrow some toilet paper to fix it up!

Burrito: Worst comes to worst, wrap some tin foil on your arm and tell everyone that you are dressed up as a burrito. Your neighbors might think you’re a little weird when you go Trick-or-Treating, but at least you’ll be able to get a $2 burrito at Chipotle.