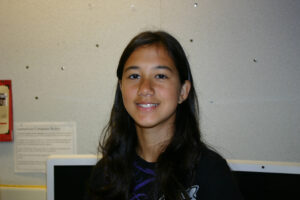 Like many other high school students, I don’t get around to starting my homework until after 10 p.m. However, the majority of these students spend their after-school hours procrastinating; online gaming, Facebooking, or simply staring at the huge pile of homework in front of you and willing it to complete itself. However, this is about as far from my situation as you can get.

Like many other high school students, I don’t get around to starting my homework until after 10 p.m. However, the majority of these students spend their after-school hours procrastinating; online gaming, Facebooking, or simply staring at the huge pile of homework in front of you and willing it to complete itself. However, this is about as far from my situation as you can get.

For example, my typical Thursday after-school schedule works like this. As soon as the bell rings at 3:15, I rush out of my 7th period English class into the nearby music quad restroom and change into my field hockey uniform, making sure I’m wearing the correct colors for an away game. Since most field hockey players don’t have a 7th period (as it conflicts with the game schedule), the bus leaves during that time. Therefore, two of my teammates and I must carpool to wherever our away game happens to be.

After a hectic warm-up, the game begins; an hour of fast-paced action by the end of which everyone is exhausted. The team piles into cars and heads back to Saratoga, longingly envisioning a hot shower and filling meal. Unfortunately, I know that there are another few hours to go before that dream becomes a reality for me, because now it’s time for marching band rehearsal.

I get out of the car and sprint toward the band lockers to get my instrument, and then rush to the lower field with case in hand. When I arrive, I’m greeted with stares as I awkwardly assemble my tenor sax. At this point, band practice has already been in session for about an hour; I’m late, as usual. I rush to my spot on the field, shin guards, skirt and all, and report the game score to those around me, glancing around the field for staff to make sure I don’t get busted for talking during rehearsal.

Although many of you probably think that marching band is my chance to rest after the game, my fellow band geeks can inform you that marching band requires more athleticism and endurance than many would think. Two hours of marching is just as tiring, if not more so, than the field hockey game that I just finished. By the end of the final run-through, it’s almost 9 o’clock and I’m left panting and out of breath. After final announcements and typical end-of-rehearsal procedures, I can’t wait to get home.

After that shower and dinner I was looking forward to earlier, I would love to collapse onto my bed and sleep, but my homework is holding me back. I tiredly pick up my pencil and start copying down math problems from my textbook into my spiral notebook. Once I finish the assignment, I climb into bed, falling into a deep sleep only seconds after I close my eyes.

I know I could prevent the craziness of my daily schedule if I only choose between field hockey and band. Many times I have been told, by people who know better than I do, that my decision to be a part of both activities is quite impossible, and that no one in their right mind would participate in both a fall sport and marching band. Well, call me crazy, but I know that I would rather fall asleep at 11 p.m. knowing I had a complete day doing the things that I love, than fall asleep at 11 p.m. after a day of Facebook and procrastination.