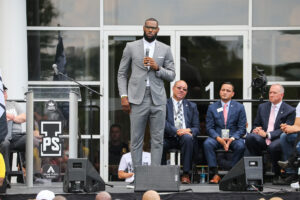 Despite pro athletes’ impressive play in their respective sports, their actions off the playing field are often what truly makes them role models to millions of fans across the globe.

NBA Star DeMar DeRozan of the San Antonio Spurs is part of a growing group of athletes who are attempting to bring attention to mental health struggles.

DeRozan grew up in roughscrable Compton, California, attended Compton High School and played basketball for the University of Southern California. As a child, DeRozan frequently witnessed violence. In addition, his mother suffered from Lupus, an autoimmune disease that can affect almost every part of the body, and DeRozan has since worked with organizations such as Lupus Canada to raise awareness of the disease.

DeRozan also supported Dallas Cowboys quarterback Dak Prescott after he opened up about his own struggle with depression. While many, including sports media personality Skip Bayless, criticized Prescott and expected him to keep his struggles to himself as the team’s leader, DeRozan was one of many athletes who supported Dak, as he tweeted “Shoutout to Dak! Real strength is shown through vulnerability.”

Freshman Samik Pattanayak also respects Prescott’s decision, saying, “Narratives like Bayless's are said so often that it was refreshing to see the whole sports community get behind Dak and reinforce that it's often better to open up than to pretend you're OK for the sake of the team.”

Cleveland Cavaliers forward Kevin Love has also spoken publicly about his own struggles with mental health. After suffering an injury in 2012, Love went through a rough stretch.

“My identity was gone,” Love said in an article for the Players’ Tribune, where he also detailed a panic attack he experienced in a game. “My emotional outlet was gone. All I was left with was me and my mind. I was living alone at the time, and my social anxiety was so bad that I never even left my apartment.”
As a result of these and other players’ actions, the NBA instituted a new set of rules starting in the 2019 season. These included a mandate on each team having at least one mental health professional and psychiatrist on their staff.

"I think it's great that the NBA values the input of its players,” sophomore Anirudh Iyer said. “It's inspiring that DeRozan and Love were able to create concrete change within the NBA and also influence millions of fans who have probably been scared to open up about their own struggles."

In 2018, NBA star LeBron James opened the I Promise School for underprivileged children in his hometown of Akron, Ohio. The school originally opened to third and fourth graders and placed an emphasis on giving children a stable environment outside of their home.

James himself struggled to get a good education, revealing in a 2018 tweet that he had missed 83 days of school in the fourth grade.

“I walked those streets and it was just like, 'There's no way I'm going to be able to get out of this situation,’” James said in an interview with Cleveland.com. “I just thought about that every day. I had dreams and I had mentors and they allowed my dreams to become who I am today.”

Despite his status as one of the greatest basketball players to step on the court, LeBron’s off-court actions are what endear him to many of his fans.

"Everyone talks about LeBron being inspiring because of all his on-court achievements and his longevity as an elite player,” Iyer said. “But in my opinion, he has one of the greatest stories off the court. He came from an underprivileged community and is giving back to that same community now. I think that's exactly what superstar athletes should be doing."

Sadio Mané: Giving back to his communities

Senegalese soccer player Sadio Mané of Liverpool FC hasn’t forgotten where he came from despite being one of the most talented players in the world.

In November 2020, Mané partnered with a community center in Liverpool, England, to talk to a young fan and helper at the center with Down syndrome. The fan was taken on a tour of Anfield, the world famous soccer stadium in Liverpool and allowed to walk on the field. He also showed Mané a celebration which Mané promised he would do when he scored a goal. In December, Mané scored against Crystal Palace FC and followed through with his promise.

In addition to his gestures for fans, Mané frequently gives back to his Senegalese hometown community. Mané, who lost his father to illness, helped build a hospital in his village. He also donated almost $60,000 to help fight the coronavirus in Senegal. His charitable actions make him difficult to dislike, even among rival fans.

Pattanayak, a fan of rival Arsenal, said. "The positive things he has done for both of his communities show that he truly values his supporters."