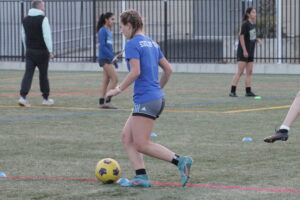 Permalink
After moving up to the De Anza League, the team expects a tough season to come.

Recap: The team advanced to CCS semis where they lost 5-2 to Santa Cruz.

With fewer than 20 players showing up for tryouts on Nov. 1, participation has declined significantly. Only about a quarter of the girls from last season returned to the varsity team, leaving girls’ soccer with no JV team. Due to some players quitting and fewer freshmen trying out, a total of 16 players currently shows up to practices. To prepare for the team’s first game on Dec. 1, the coaches ran tryouts similar to practices in order to allow more chances for the team to play together.

The team lost four key players to graduation, and multiple past players also didn’t return, including juniors Katelyn Fritz and Emma Green. On top of that, junior center back Laurel Sun, freshman midfielder Sophia Green and sophomore winger Asheeka Naronhoa are also unable to play due to knee injuries, so the varsity team has a weaker defense line than in recent years.

Most significantly, the Falcons began the year without a goalie. The team is currently recruiting a goalie, but until then, senior Angelina Hong is playing the position.

Partially alleviating these losses is the recruitment of two freshmen: Sasha Prasad and Keaton Spendlove.

One of the team’s main goals this season is to improve chemistry with the new players, allowing everyone to feel welcome and bolster their performance during games.

“I want us to stay focused and on track mentally throughout the entire season,” senior wing Aleks Verga said.

As one of the captains guiding the team, Verga plans to be a good role model and leader. Compared to her previous years on the school team, she expects a larger role of responsibility to guide the other players and help them improve.

“I want to give the juniors a good example of how they should step up next year,” Verga said.

To help build up the team’s relationships, head coach Ben Maxwell and assistant coach Andrew McRobbie often encourage them to do bonding activities outside as a team, such as weekly boba runs together on Thursday afternoons.

“If we’re going to have a good season, we really need to rely on the group as a whole,” Maxwell said.

The coaches have tried to emphasize the team aspect of the sport and resisted relying on key players.

With their first home game against Los Gatos coming up on Dec. 1, there is a lot of anticipation as to how the team will do this season.

Their record last season allowed the team to move up to the De Anza League, competing against more advanced schools such as Fremont and Wilcox. However, due to a small roster, many injured players and a loss of key players, the advancement will be a major challenge.

“We might win less games, but we will still play all the games with the same amount of intensity and heart,” Maxwell said.