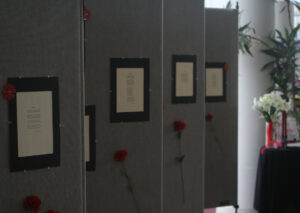 After being displayed in San Francisco for several months, poems about downtown Baghdad’s famous Mutanabbi Street, written last year by Judith Sutton’s Poetry 1-3 classes, are back at Saratoga High. The poems were on display at the Saratoga Community Library last year to commemorate the one-year mark for the tragic incident and were on display in the school library from Feb. 27 to Mar. 6 this year for the event’s second anniversary.

These poems memorialized the tragic bombing of a vital street in Baghdad, Iraq, on March 5, 2007. The street, filled with bookstores and coffee shops, was famous for centuries as the intellectual center of Iraq, a place where all kinds of people could exchange their ideas without consequence. Most other places in Iraq repressed a freedom of speech and constructive discussions on heavily debated topics. The bombing of Mutanabbi Street represented an attack on the freedom and culture of Iraq and, in effect, the possibility of such an attack in any intellectual center anywhere in the world.

“[These poems are] commemorating the role Mutanabbi Street was trying to [play],” said senior Steven McLellan. “It was trying to promote culture, trying to show that there is culture in Iraq, in an area that seems so war [stricken], so impoverished, and that there can still be a glimmer of hope for the future.”

Sutton’s students had their poems presented at the Pleasanton Arts and Poetry Festival last April. Senior Adela Chang’s poem “Storefront” won first prize. The founder of the Mutanabbi Coalition, Beau Beausoleil, was so impressed with the poems that he read some of them at coalition forums held across the nation. Further, Coalition member Mike Day, also printer and publisher at Studio 1801 in Los Altos, was so moved by them that he offered to publish them as a group. The book of 27 poems, “Demons or Martyrs,” was released on March 7.

Students whose poems are featured in this book are each entitled to a free copy but have chosen to pay for them anyway to help support a man who was injured on Mutanabbi Street.

“Throughout this project, we learned all about Iraq. We saw Iraqi art and read Iraqi poetry and cooked Iraqi food,” said Sutton. “And I think that the most important lesson we all learned was that contrary to how they are portrayed, they are not really ‘the enemy.’”