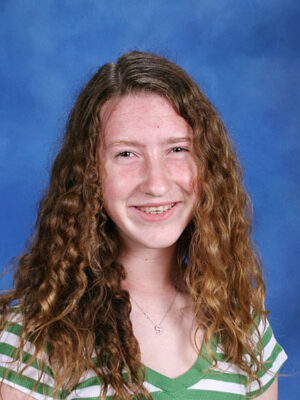 I had only taken a few steps, however, when my sister’s anguished cry stopped me. She’d slipped and fallen into a puddle and she looked up at me, clearly on the verge of tears. “Sarah, help me,” she wailed. I remember running back, reaching down and plucking my sister out of the ensnaring mud. We walked the rest of the way together.

We are now much older; she in 7th grade and I in 9th, but that bond we share has, if possible, grown stronger over the years. Rachel loves many of the same things I do, and her handwriting is, in her own words, a “curvier, rounder version of Sarah’s”. We both have a great affinity for writing and drawing, and especially reading.

This last love of ours found us in the library surrounded by our stacks of books, eagerly searching for another prize to add to the pile. I was on my way back to Rachel when something caught my eye. It was a flyer announcing the annual teen poetry contest. Scouring the sheet for details, I discovered that if I could submit up to 3 poems at the front desk by April 31, I was in. I rushed back to the table to tell Rachel, and then started writing feverishly.

Thus began a long period of trial and error. I composed many poems in those next few weeks, writing whatever came to mind. I went back and revised my earlier poems, changing a word here, adding a comma there. By the end of the month, I’d amassed about 30 poems I deemed fit for entry.

Now, however, I faced a new dilemma. What should I take? Which poem was the best? I grappled with questions like these for hours on end, enlisting the help of friends and family. At this point, Rachel was a godsend. She read innumerable poems, welcoming them with a teasing smile and the oft heard remark, “Not another one?!” She helped me narrow it down to seven, then five of my best works, at which point my family stepped in and chose their favorites. After a bit more deliberation, I finally had my 3 winners.

Our next stop at the library was one of tense anticipation and hope. I shuffled my neatly rewritten poems together and held my breath as they were taken away. With light, happy steps I walked back to Rachel, grinning stupidly and feeling exhilarated. We watched as the woman read my poems, silently analyzing every nod and expression. When she finished, I sat back, telling myself to relax, take it easy, and hope for the best.
Fast forward an hour, and I was still thinking about it, and my sister was bored. Unthinkingly, I suggested she write a poem for the contest and submit it. Rachel, being who she was, took me up on it and spent the better part of 15 minutes writing occasionally asking me for a definition or a rhyme. Pretty soon, we were in the same boat, fidgeting and praying for the results to hurry up and get here! All that could be done, however, was wait.

Sometime later, we revisited the library. I had completely forgotten about the contest, and as I stared up at the winners, I thought suprisedly, “At least one of us got there.” Not my work but my sister’s was displayed, the offhandedly written thing to combat boredom. In the left-hand corner was a stamp proclaiming “Honorable Mention”. Strangely, I didn’t feel jealous or angry; just full of pride and happiness for my sister. She’d accomplished what I could not, and we could both share in her triumph. Her poem was, admittedly, better than any of mine, with an underlying rhythm to it I could not fathom.

Here is what she wrote:

The Girl with Blue Hair
I once saw a girl who told me these things,
About who we are, and how we spread our wings.
She had blue hair, cut shaggy and short,
Wore military boots, and large men’s shorts.
She fingered a necklace on display,
At the kiosk I walked by every day.
She looked in my eyes, then deep in my soul,
And told me some things she thought I should know.
She said not to be scared, to just be myself,
That I should never change for anyone else.
She told me to say just what I thought,
Even if it went against all they had taught.
And then she was gone, what she’d said I had heard.
But throughout the encounter, she hadn’t said a word.