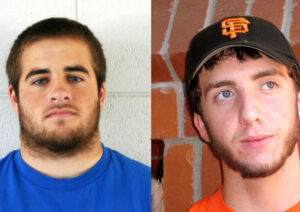 As the San Francisco Giants fought their way into the playoffs and battled the Atlanta Braves and the Philadelphia Phillies for a spot in the World Series, seniors Kent Paisley and Greg Johnson showed their support by sporting what is known as a “playoff beard.”

As the San Francisco Giants fought their way into the playoffs and battled the Atlanta Braves and the Philadelphia Phillies for a spot in the World Series, seniors Kent Paisley and Greg Johnson showed their support by sporting what is known as a “playoff beard.”

According to Paisley, playoff beards have been around for as long as he can remember. Playoffs in most sports are synonymous with playoff beards, he said.

Both Paisley and Johnson have been fans of the Giants “since they were born.”
“I’ve gone to some games at Candlestick Park, and I was there at a playoffs game,” said Johnson. “I saw JT Snow hit a game-winning home run when I was 4.”

With 4-1 series victory over the Texas Rangers, the Giants have secured their first championship since 1954 when they were in New York and their first as the San Francisco Giants. This is a dream come true for diehard fans like Paisley and Johnson, especially because the Giants were regarded as underdogs throughout most of the playoffs. They are well known for their immensely close games that many fans call “torture baseball.”

Some of the favorite misfit players include Cody Ross (Ross the boss), Pat Burrell (Pat the bat), and the closer Brian Wilson, whose unique beard has started the catchphrase “fear the beard.”
“[My] favorite player is Buster Posey. When you’re down in the 9th, who are you going to call? Call Buster!” said Paisley.

“Most of the other students yelled ‘shave’ whenever I walked around school,” said Paisley, who finally shaved following the team’s series victory on Nov. 2. “But my fellow Giants fans were big fans of it.”
After the Giants finally beat the Rangers and won the World Series, both Johnson and Paisley went crazy.

“I was pumped and I was excited right when Brian Wilson struck out that last batter,” Johnson said, “I stood up, yelled and gave my dad a high-five.”

The victory was thrilling but also sad. Johnson had grown out his beard for three weeks and Paisley almost a month before they decided to shave and move on.

“It was sad to see it go, but I have to move on from the Giants,” Paisley said. “Now it’s time to see the 49ers struggle.”