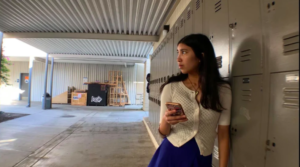 Shot from “Every Move You Make” written by sophomore Olivia Smith and directed by senior Elsa Ashraf.

Rather than auditioning in the Thermond Drama Center on Oct. 7 for a traditional fall play, students trickled in and out of a Google Meets call as they were called by student directors to read original screenplays written by their peers.

This year, instead of the drama department’s annual fall play, the department is running a three-month student-led film festival where students will fulfill all roles in the production process, including scriptwriting, production, editing, directing and acting. Each is creating a 10-minute film.

The learning unit, which began in September, gives each student in the drama classes the opportunity to take on multiple roles, such as acting and post-production, and the festival is open to any student, regardless of prior experience. This way, all students have the opportunity to participate in a drama production remotely.

For the school’s new drama teacher Bryan Ringsted, the pandemic has provided exciting opportunities to teach new material. Because in-class activities and lessons are not possible right now, he decided to incorporate a film unit into the curriculum in lieu of the normal drama unit since it was more feasible to teach over Zoom.

“This whole opportunity has been created because of the pandemic,” said Ringsted. “A lot of students have developed a very unique and creative cinematographic eye, which isn’t something I would normally focus on in the drama or performing arts class.”

Despite the excitement from both teachers and students to learn something new, there have been challenges with teaching all the needed technical skills.

“I have been trying to teach my students all of the elements of film production, but people go to four years of school to learn this,” said Ringsted. “So I think it’s been a little intense for my film directors.”

For Ringsted, one of the major challenges that the department is facing is how to overcome COVID-19 regulations. Since students are not yet allowed back on campus in large groups, each scene for one film needs to be filmed separately. This means that Ringsted has to be there supervising every film session, and needs to coordinate with administration and athletics to find times in which areas of the campus can be reserved for filming. And with 30 students participating in nine films, the challenge has been monumental, Ringsted said.

Beyond filming difficulties, students in the films have also had to go out beyond their comfort zone to handle tech and design.

“There normally would be an adult or a dedicated team handling tech and design in the fall play,” explained Ringsted. “Now, the students have to make more creative decisions.”

For sophomore Olivia Smith, who plays Zahra in “Owl and Raven,” directed by senior Chloe Hsieh, the film festival presents not only an opportunity to collaborate with her peers but also to pursue her interest in screenwriting. Her screenplay “Every Move You Make” is being directed by senior Elsa Ashraf.

Smith said that the film festival is a new experience to be able to playback and analyze her acting. With filming, Smith notes that she has become not only an actor but also the audience.

“[With the fall play] you never see how it turned out because you were on stage instead of in the audience, but with the film festival, we have a chance to watch ourselves and others perform,” Smith said.

“It is not just a theater film festival,” Ringsted said. “Even though many of the students are from the theater department, it is a Saratoga High School film festival that pulls from pretty much every other department that is involved with creativity and making art.”

The students will submit their final pieces to Ringsted on Dec. 7, and there will be a public online screening on Jan. 8 and Jan. 9 at 7 p.m..