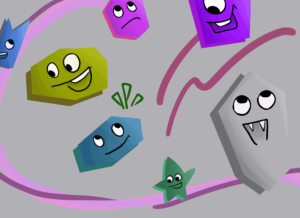 For us, the biggest loss of online school is probably not being able to spend lunches and tutorials playing video games together at school.

Online, there isn’t as much you can do — maybe you can play .io games together and reminisce about that one time you got first place in Surviv.io in middle school, or play Nintendo’s latest and feature-stripped Mario Party with the people who have bought a $200 Switch along with the $60 game and purchased a Nintendo Online subscription for $20/year as well.

However, we recently discovered a gold mine of activities for us to play together in “Jackbox Party Packs.” Jackbox Games releases their party games in packs, of which they currently have seven. In every Party Pack, there are a handful of games, each with different objectives and themes. For a group of friends to play together, only the host has to purchase a pack, and others could simply join from a web browser via a 4-letter room code.

Among our friends, we have Party Packs 2, 3 and 4. There are a few games from those packs that fall flat, but there are also a few standout games. Here is our top 5 ranking of our favorite games.

“Quiplash,” present in packs 2, 3, and 7, is a staple of Jackbox Games. “Quiplash” is comparable to “Cards against Humanity,” where players fill in prompts and then vote on the funniest result. Your mileage in this game varies based on who you play with. It ended up boring for us, as it quickly lost its charm when we started competing fiercely to write the edgiest line.

The fourth best game is “Monster Seeking Monster,” which is essentially a dating-themed game of betrayal. The main goal is to secure dates with other players — but you only have four messages to use when talking to other players. If you successfully date a player, you gain a heart, and each player is allowed one date per night. The player with the most hearts wins, and the most common strategy among our friends is to trick others into trying to date them while only accepting one date so the other players do not gain a heart.

Too many times, there’s just that one friend who manages to seduce half the party by coming up with the most ironic and cringeworthy pick-up lines right before they reject all of them and date someone else. The best part is that messages between players are shown, and it’s always hilarious to see spectacular declarations of love ending up being empty promises.

You might think “Civic Doodle” requires teamwork, but that’s simply untrue. The objective of this mini game found in Party Pack 4 is for players to complete several doodles for a city together. The twist is that players go one by one, drawing on top of the previous player’s art.

Part of the game has the players draw a portrait, and the results are almost never flattering. One of our friends always draws the gaudiest makeup on every single face, so we end up with faces covered in lime green eyeliner and enormous red lips.

“Survive the Internet” from Party Pack 4 is a fantastic game as well, where you have to take someone’s words and twist them with context. Like “Quiplash,” it’s a text-based game where players have to vote for the option they found funniest, but it’s honestly much more entertaining than Quiplash because of how unique the prompts are.

One of our favorite prompts from Survive the Internet is choosing hashtags for a social media post. For one post, the body was “making fun of others :(” which was made complete with the hashtag “#newyearsresolution.” There’s nothing more satisfying than roasting or trolling people with hashtags, and we can say with certainty that the game qualifies as hilarious.

Our favorite game of all the Jackbox games we’ve played is “Tee K.O.,” which is included in Party Pack 3. Players have a limited time to draw several images and write slogans which the game would later place on a T-shirt. After the time’s up, every player gets an assortment of drawings and slogans, and has to find the best match; then the players vote on which T-shirt they think has the best design.

It’s hard to choose which T-shirt is the best, especially when you are given the choice of either a frighteningly-drawn, four-legged monster captioned “waifus be like'' and a dramatic stick figure screaming “I am ready for ASB Afterhours babyyy.” Most of the time, it just ends up with everyone giggling helplessly at every new T-shirt that comes on the screen.

We’ve had a lot of fun these past few months with Jackbox. Still, it’s not perfect. Although anyone can join from their phone or computer on their browser, the host still has to purchase the party pack itself, which costs $25 if there isn’t an ongoing sale. That sounds like a good deal, but not all of the games will get played — there’s definitely a few poor-quality games in each pack.

But there are plenty of good ones to make it worth a purchase. To be honest, the intensity of our laughing from these mini games is probably enough to give us six-packs. Thanks to Jackbox, we can still socialize and bond with our friends during quarantine instead of staring outside the window thinking about how we could’ve done better on that math quiz.