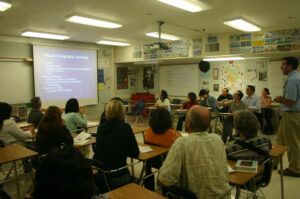 Saratoga parents got to go back to high school and follow in the steps of their sons and daughters at the annual Back-to-School Night on Sept. 10. Parents spent 10 minutes in each period getting to know the teachers that their children will be with this school year. The school holds this well-attended event every year to open communication between parents and teachers and to let parents become familiar with how teachers operate their class and the expectations involved.

The night kicked off with a performance by the SHS Jazz Band at 6:45 p.m. while several hundred parents entered the quad. Afterwards, principal Jeff Anderson introduced the board members, assistant principals and PTSO presidents to the parents.

PTSO presidents Carolyn Doles and Shinku Sharma introduced the new organization and urged parents to donate to the Just Do It! campaign which helps fund many programs at the high school such as Link Crew, the tutorial center and The Falcon.

“We all as parents bring the children into the world and we hope they do well, and you’re kind of in the last stage of parenting before they go off,” said Matsuoka. “We as a staff are so thankful to you for the support you give your kids. Thank you for sending students who are ready to learn and love to learn.”

Anderson also praised the high school for raising the API score, which ranks first in Santa Clara County and third in the Bay Area. He also commended the environment created at the school.

“I’m trying to think of a word that captures Saratoga High, and there are many that come to mind, but one I came across today was commitment,” said Anderson. “The kids are very committed. As you know, they dedicate a lot of time to academics and extracurricular activities: a lot of time to band, drama and athletics. They learn to be tolerant to others and respectful to others on campus and it’s a great place to be around every day. It’s a wonderful student body.”

Link leaders were there to help direct parents around the school throughout the night.

The freshman class also took advantage of the night to do some fundraising for their class. They sold water bottles throughout the night and hoped to make some money for Homecoming. Although they hoped to make at least $50 to get started with decorations, business was slow.

Afterwards, senior parents also met for a Grad Night meeting in the cafeteria.

As the halls eventually emptied of the older and more mature versions of the student population, chairs in the quad were stacked up and the podium on the steps was moved back inside—ready for another day of regular high school students.