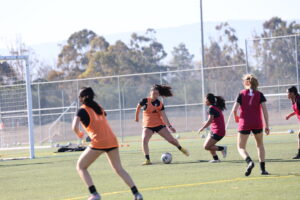 In December, senior Michelle Lim logged on to her computer at 4 a.m. She was anticipating a meeting with a college women’s soccer team coach. At first, Lim said the calls were nerve-racking and scary, but in time, the interviews became less stressful and she started looking forward to them.

Lim has been playing soccer for 13 years now, 10 of which have been for FC Bay Area as a center back. Since college recruitment for soccer starts earlier than other sports, Lim was already in contact with most of her top schools for Division III soccer by the end of sophomore year. By junior year, she was having at least three calls a month with different schools. But when COVID-19 upended the world last year, the situation rapidly changed.

Instead of going to live games and watching high school athletes play their sports, coaches are now recruiting through interviews over Zoom and FaceTime. In addition, they are requesting student athletes to provide previously filmed footage of themselves playing their sports.

Lim also found that certain sports — team sports in particular — are harder to get recruited for. For individual sports such as swimming, cross country and track, athletes just have to send in their recorded metrics. However, for team sports the criteria is different; many colleges look at how the individual contributes to the team, which is difficult to document during the pandemic.

“For sports like soccer, you're basically screwed if you don't have footage,” said Lim. “I was really lucky in that my dad recorded most of my games and my games were also filmed by my club, so when the pandemic hit and we stopped playing games I was relying on those game films to put together highlight videos.”

Another difficulty with recruitment this year is that many current college seniors are staying an extra year. Since the NCAA Division I Council voted to allow another year of eligibility for all spring-sport athletes, whose seasons were cut short by the coronavirus outbreak, many have taken this chance to stay for another year, effectively eliminating many positions that would have been open.

A few schools at the top of Lim’s college list had to stop their recruitment due to the large number of college seniors staying behind for an extra year.

Senior Michael Burry, who has played competitively for SHS’s men’s golf team, had similar experiences during his recruitment process. He recently committed to Emory but said the hardest part of the recruitment process was the reduced number of seats.

“My top choice for college made me an offer early in the summer and sent my academics to admissions before letting me know in August that they had zero spots for my class due to deferments from their class of 2020 recruits,” Burry said.

Although he understands the difficulties of recruitment during the pandemic due to the extra constraints for both colleges and players, Burry said he wished things could have been different.

“Obviously these athletes deferred for good reason,” Burry said. “But it still kind of sucks to see that our class didn’t get an opportunity that would have come in a normal year.”