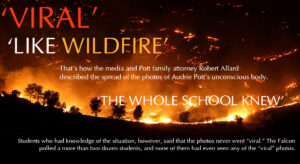 “The whole school knew,” Pott family attorney Robert Allard said to Yahoo! News of the purported “viral” spreading of photos taken of Audrie Pott while she was unconscious at a party prior to committing suicide eight days later.

April 15, Editors' Note: We are not trying to lessen Audrie's case or sympathize with the boys in any way.
In the opinion article,  Samuel Liu never said there was no cyberbullying. There was, indeed, cyberbullying involved — the photo just did not “spread like wildfire” among the student body as the media claimed.
We thought that Lisa Pott made a good point on April 15 at the news conference when she said that it didn’t matter how many people had seen the photos, what mattered was that people did see the photos and that Audrie thought that everyone knew about the incident.
We fully support the anti-cyberbullying agenda — cyberbullying is a problem among teenagers. What we were aiming to do was to set the record straight — knowledge of these photos, based on our reporting, was fairly limited among the 1,400 students of Saratoga High School.
“The whole school knew,” Pott family attorney Robert Allard said to Yahoo! News of the purported “viral” spreading of photos taken of Audrie Pott while she was unconscious at a party prior to committing suicide eight days later. “It’s the worst way imaginable to be violated. That’s something to be reserved for your husband. It’s savage. It’s just savage."
Sadly, a myth is spreading — that the entire school “knew” about the “viral” photos, and that almost all students participated in spreading them. This near-lie, that SHS students would actively send to their classmates pictures that would be classified as child pornography, is distressing. If there was a “viral” photo, it wasn’t very viral, as the more than two dozen students The Falcon said they knew no one who had seen the photos.
In a recent story, Falcon reporters spoke with sources who say that no more than 10 students saw the photos and the photos never went on any social network.
What seems to be happening is that this already horrible situation is being twisted to fit an agenda against cyberbullying.
“It has become a depressingly familiar story in the digital age,” wrote Marc Emmons of The San Jose Mercury News in a piece tying together the Pott tragedy and cyberbullying. “An alleged sexual assault occurs. Images brazenly are shared electronically. Reputations are destroyed and, in some cases, a humiliated teen even takes his or her own life.”
The generalization of the tragedy is distressing. If anything, it’s disrespectful to those hurt by the tragedy: the Saratoga community. The implication is, your tragedy was just one of many, part of a trend. In the process, Audrie Pott’s life has become defined by the worst thing that happened to her. Audrie Pott the person has been forgotten.
What’s more, the Mercury News takes on a condescending tone. It’s the teenagers, the paper argues, that don’t know how to use social media.
Emmons writes: “Audrie's death is only the latest in a series of cyber-related tragedies fueling a debate about the negative effects of social media — especially on kids who are anxious to live their lives through electronic devices but unprepared to deal with the sometimes harsh consequences.”
I understand that Allard, the family attorney, thinks that “the whole school knew.” But if the Mercury News and other media had bothered to interview Saratoga students, perhaps they would have found out that Allard’s claims are overstated. The media has taken the attorney’s bait, while not checking the facts. Journalists should be after the truth, and what’s happened is that, since the Saratoga administration has been silent, their main source has been Allard.
I understand that cyber-bullying is a problem that needs to be addressed. But to allow a tragedy to be twisted to fit an otherwise worthy cause? That’s not right.
1 view this week