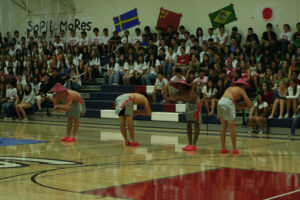 Anxious but excited for their first rally, the freshman class filed into the auditorium on Sept. 5, taking their place in the bleachers under the green banner. The sophomores in white, juniors in blue and seniors in red followed suit as Rihanna blasted from the stereo.

“I thought it went really, really well,” said Gasik. “I thought it was one of the best rallies ever. All the students were into it.”

Although school spirit in the past has been lackluster, student attendance and enthusiasm at this rally was high. The stands were pretty much full, showing promise for participation in school events this year.

Seniors Kiersten Dolbec, Kelly Darchuk and Megan Mandell dominated the first game, Torch Passing, a relay involving a torch, goggles that distort the wearer’s vision and a sleeping bag. The win set the tone for the rest of the rally as the seniors, in a sea of red shirts and thundersticks, leaped to their feet and cheered their fellow seniors to victory.

Senior domination continued with the next game, the Hurdle Relay. One boy from each class jumped over, under and over a succession of three hurdles then crawled to a skateboard waiting a few yards away. The competitors then clambered onto the skateboard facedown and paddled around the gym, steering, somewhat unsuccessfully, with their hands. In a surprising victory, freshman Dominic Guercio defeated junior Ben Clement, although he was beaten in the final round by senior Nikola Radosavljevich.

In the third and final game, Office Space Jam, two boys from each class sat on chairs and tried to get a basketball into a garbage can. Although the players were supposed to stay on the chairs at all times, some dirty playing ensued and seniors Chris Owyang and Alvin Hsia brought home another win.

Students can look forward to another rally in about a month before the traditional Los-Gatos Saratoga rivalry football game, followed five days later by the Homecoming night rally.