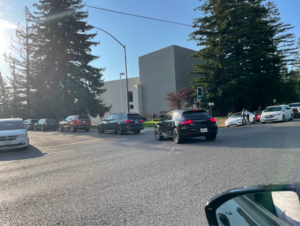 Photo by Shaan Sridhar
An unlucky Porsche finds itself stuck in the Saratoga-Sunnyvale Road and Herriman Avenue intersection.

Not many of us enjoy being late to school, especially if it happens regularly. But it’s so much worse when you leave 30 minutes before school starts, only to be delayed by flawed traffic laws favoring those from a different part of town.

Buckle up for some metaphors and allow me to explain. It’s story time.

The traffic flow from Saratoga-Sunnyvale Road to Herriman Avenue is a logistical nightmare in dire need of fixing: Cars turning right are free to turn whenever, consequently blocking cars turning from other directions. The fix:  Traffic officials should place a “No Right Turn on Red” sign at the intersection of Saratoga-Sunnyvale and Herriman Avenue.

Picture this scenario: There’s a typical hard-working, sleep-deprived junior named Greg. Greg lives far up on Pierce Road and leaves well before school starts. He turns onto Saratoga-Sunnyvale Road and drives into the slow-moving left turn line to get onto Herriman Avenue, the only point of access to the school’s parking lot.

As Greg patiently waits for the traffic signal to display a green left arrow, cars from the opposite direction turn right and spill onto Herriman Avenue. That line is also long, but it continuously moves as each car aggressively manages to shove themselves onto Herriman.

When Greg’s light finally turns green, he discovers a dire situation: Only two cars managed to turn left because cars turning right backed up the entirety of Herriman. When space finally opens up, Greg hurriedly attempts to turn onto Herriman. But Kyle — a student from the right-turning part of town — speeds onto Herriman and leaves Greg in his dust.

Greg is stuck with no option but to move as close to Herriman as possible, blocking the intersection.

Greg then begins a steady stream of honking at Kyle. Eventually, the cars Greg is blocking pick up on the musical beat and begin their own chorus of honks, albeit much louder. A couple shouts even flare throughout the orchestra.

But then the finale arrives: A symphony of police sirens plays from an officer’s motorcycle at the intersection, waiting to ticket the unfortunate student or parent who has been forced to block the intersection as a result of the poorly planned rules.

I’ve seen this scenario play out twice this year already, and it’s been less than four weeks since school started.

Those turning left have to leave their homes ridiculously early in order to get to the school parking lot at a reasonable time — turning right on to Herriman via Saratoga Avenue is virtually impossible due to the backed up traffic from Redwood and Sacred Heart.

Those turning right don’t have to leave early; instead, they can abuse their ability to squeeze onto Herriman to loot prized minutes of extra sleep.

It’s only fair that everyone waits their turn. If a No Right Turn on Red sign were installed at the intersection, each directional flow of traffic would have a fair shot and amount of time to get onto Herriman.

The effects will be a bit drastic at first. Those turning right might suffer from some traumatic shock; they might be late a couple days or lose some minutes of sleep. On the bright side, those turning left will be overjoyed.

It’s a small price to pay for fairness. Eventually, all would settle and the Saratoga-Sunnyvale Road intersection with Herriman Avenue will become a fair crossroad between two flows of heavy traffic.

Your take on my proposal might depend on which end of town you’re coming from, but fairness should be the guiding principle in solving this difficult and annoying issue.