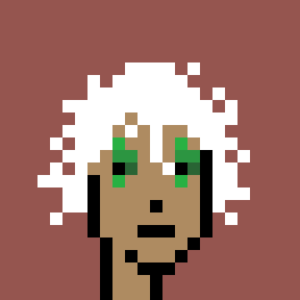 A screenshot of Cryptopunk #9998, which lacks the blockchain and inherent value of the NFT.

Cryptopunk #9998 sold on Oct. 28 for $532 million to an anonymous buyer. This jaw-dropping price soared so high largely because it was transferred to various crypto wallets owned by the same individual until the price reached $500 million. It is now on sale on Larva Labs for 250KΞ or a whopping $796.31M. Nevertheless, this figure is only representative of a fraction of the value of non-fungible tokens currently circulating the internet.

$2.5 billion worth of non-fungible tokens (NFTs) were sold in the first half of 2021, but this number has almost tripled as of the end of 2021. These little bits of “screenshottable” media — digital assets that supposedly can be easily copied — are being valued by some at prices that have led some to wonder whether they’ll lead to great wealth while others are left scratching their heads.

An example of one of the most expensive NFT series is the Cryptopunk series, consisting of randomly generated pixelated portraits starting at around $200,000 and going up into the millions. Cryptopunk #7523, Cryptopunk #3100, and Cryptopunk #7804 are three of the nine highly valued aliens in the series, selling at 11.75 million, 7.67 million, and 7.6 million respectively.

Another popular series is the Bored Ape Yacht Club, sporting computer generated pictures of monkeys with different expressions and costumes. Of these, the most expensive is #2087 worth 2.3 million. However, investors can also find NFTs on sale for mere cents or even fractions of a cent. The series MetaShiba, where an investor purchases an NFT as a character to play in the MetaShiba game, was valued at $0.00000000241 as of Jan. 5.

So how can you buy an NFT? The first step is to create a crypto wallet, which is a digital wallet to store crypto currencies. Afterwards, you can send the crypto tokens you purchase, such as Ethereum, into the wallet. Now, you can connect this wallet to a marketplace that sells NFTs and you can bid on ones you want. If you win, the NFT is yours, though you may have to pay extra transaction fees based on the market you are using.

Class of 2021 alumni Isaac Le has been one of the many trading these assets this past year.

“I found it extremely risky at first,” Le said. “But when it started gaining traction on mainstream media — that was when I decided to jump in.”

Le bought videos and images of various basketball players. At the time, digital collectibles generated by Top Shot were quickly gaining traction, and Le hoped to benefit from the fluctuation of the prices of these assets. In the end, he said he made several thousand dollars on his transactions.

At a broader scale, fueled by social media and the support of various notable influencers such as Katy Perry and Jay Z, NFTs are now one of the most popular assets traded on the market. Proponents herald their blockchain technology, decentralized nature and empowerment of lesser-known artists.

At the same time, NFTs are highly controversial, considered by many notable investors to be potentially worthless and unreliable.

“[The crypto space is] disgusting and contrary to the interest of civilization,” Charlie Munger, right hand man to Warren Buffet, said during Berkshire’s annual shareholder meeting. “I don’t welcome a currency that’s so useful to kidnappers and extortionists and so forth, nor do I like just shuffling out of your extra billions of billions of dollars to somebody who just invented a new financial product out of thin air.”

NFTs can be best compared to art and other similar collectibles in the sense that their value is determined solely by investors. High net worth individuals often acquire pieces for various purposes from art collection to tax evasion.

NFTs have value due to the underlying code that differentiates each piece. They are based on blockchain technology, where transactions are recorded within “blocks” that are completely trackable through a transparent network accessible to all participants.

Blocks are composed of three elements: data of the participant’s choosing, a randomly generated 32-bit whole number and block header hash — a 256-bit number binded to the 32-bit whole number. Each block is unique and linked to the block before it. The “chain” connecting each block makes it very difficult to alter the contents of each block, and the individual blocks confirm the exact time and sequence of the transactions.

This means that NFTs can be securely transferred, and each NFT is completely original; screenshots of the artwork do not have the same worth because only the original that resides on the blockchain has value.

The most common critique of NFTs lies in disbelief over the concept of owning digital media and doubts about the true value they hold. For many, it is difficult to justify the purchase of NFTs with no apparent physical value in the same way that an original painting by a respected artist has worth.

Le admitted as much, saying, “I’m essentially buying video clips or images that I could just screenshot or watch on YouTube. I think it’s a little ridiculous.”

Le said he is not completely sold on NFTs, despite the underlying blockchain technology, and he mainly sees it as a trading opportunity. He is critical of the current lack of regulation and other uncertainties surrounding the asset and its value.

“I saw it as an opportunity to quickly make some money,” Le said. “It worked out, but I would never invest in it long term.”

On the other hand, in a speaker event with the Saratoga High Investment Club, Michael Li, the vice president of Coinbase, emphasized the importance of looking past the seemingly obvious weaknesses and into the fundamental composition of the NFT.

“We’ve never had a technology like this before,” Li said. “The more you know about blockchain, the more you realize the full range of things you can do with it.”

Li believes that blockchain represents the next major phase of innovation. He compared it to the internet in the 1990s and early 2000s, emphasizing that “all applications we use today can be rebuilt for better on the blockchain.”

Like currencies, NFTs derive value from demand. Without it, the token is worthless regardless of the blockchain. Among less popular and liquid NFTs, a common practice is to sell it to themselves to artificially increase demand.

Still, the volatility and manipulability within certain NFTs is no different than pump-and-dump schemes in other markets. However, NFTs — like other cryptos and assets — are considered to be property by the IRS and are not a security. This allows investors to sell for a loss, and then use that loss to eliminate capital gains taxes on other assets such as stocks. Investors can quickly buy back the crypto they sold, and in doing so, avoid any losses. This tax loophole is called “tax-loss harvesting.”

Despite the relative volatility and lack of regulation, senior Dhruv Singh believes NFTs represent opportunities for wealth building in the next few years.

“NFTs are distinctive even within the crypto-asset sphere, since the tokens serve as a ‘bridge’ between the virtual and physical worlds through corroborating digital ownership, which furthers blockchain adoption, and allows average households to participate in the digital economy,” Singh said. “From my perspective, NFTs are one of the most exciting innovations within crypto-spheres.”

Singh said he looks for three characteristics when evaluating standard assets as potential investments: scarcity, functionality and distinctiveness. He said that most NFTs meet the scarcity criteria, but not the functionality and distinctiveness criteria, which he feels is something “investors should understand prior to investing in the asset-class.”

With highly volatile markets and cash flows impossible to determine given the nature of the asset, the risks for NFTs are hard to ignore for many investors. Yet over the past few months, increasing numbers of auction houses have adopted NFTs, indicating that this market is the beginning to be accepted.

In the long term, Singh said that he does not believe that  NFTs are only a “fad,” and is looking to take advantage of the market by hedging against the asset by taking short and long positions.

“It’s easy and completely understandable to laugh off this recent trend,” Singh said. “At the end of the day, you get to do what you like with your money.”