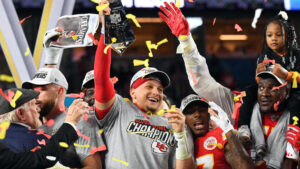 The best time of the year is finally here! Not Christmas, but the NFL playoffs. After the preliminary Wild Card round and the divisional round, there haven’t been many surprises. Despite the ridiculous number of players being placed on the COVID-19 reserve (45 of them) and the uncertainties of active players each week, the four teams remaining were the favorites of many analysts coming into the season: the Buffalo Bills, Kansas City Chiefs, Green Bay Packers and Tampa Bay Buccaneers.

Here is a recap of everything that has occurred during last weekend's divisional round. The Bills faced off against the Baltimore Ravens, and after struggling for the majority of the game, the Bills were able to capitalize on defensive back Taron Johnson’s 101 yard pick-six, defeating the Ravens 17-3. The Chiefs played the Cleveland Browns, and backup quarterback Chad Henne was able to stop the Browns comeback attempt after star quarterback Patrick Mahones went down with a head injury.

The most exciting game this weekend was the Buccaneers vs. the New Orleans Saints. The Bucs defense was able to force four total turnovers, defeating the Saints 30-20 in what may be quarterback Drew Brees’s last NFL game. Finally, the Packers were able to pick apart the stellar Los Angeles Rams defense, winning 32-18.

The Bills defense proved their dominance through their blitz against the Ravens and quarterback Josh Allen will continue to improve his accuracy as weather conditions get better, making the Bills a threat coming out of the AFC.  However, if Patrick Mahomes is able to return to action this weekend, the Chiefs offense will be very hard to stop with star tight end Travis Kelce and wide receiver Tyreek Hill. Whe Bills defense will not be able to keep up with the Chiefs, their offense will keep the game close, resulting in the Chiefs winning 34-31.

As the season has progressed, Bucs quarterback Tom Brady has built a stronger chemistry with his Pro Bowl receivers Mike Evans, Chris Godwin, and Antonio Brown. This trio will be too much for the Packers defense to handle, but the weather conditions may affect both team’s passing attacks. Although the Bucs should not expect four turnovers like against the Saints, they should be able to find enough offensive opportunities to beat the Packers 28-24.

With this, I predict that the Bucs and the Chiefs will be facing off in this year’s Super Bowl, a battle between the past and the future of the NFL in terms of quarterbacks. Both teams feature an uptempo offense, with the Bucs having a slightly better defense; however, in typical Mahomes fashion, I believe that this game will stay close until the very end, where the Chiefs will be able to pull the game out.

Which team do you think will hold the Lombardi Trophy this year?