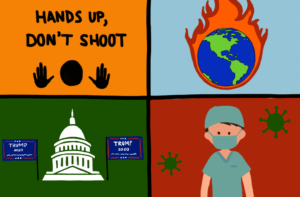 Every time a new year arrives, there are cries of “new year, new me” as people garner excitement for a fresh start. But while the world heaved a sigh of relief as an objectively awful 2020 ended, the dawn of a new year does not mean the end of our problems.

The pandemic has not magically disappeared. The U.S. continues to hit records for the most cases in one day, and its death toll is nearing 400,000.

The vaccines now being distributed are a light at the end of a tunnel, but they are not being distributed efficiently. The requirements for eligibility to be innoculated are too restrictive, and as a result, millions of doses sit unused in freezers.

As long as coronavirus is still a major threat, we cannot return to school. Students and staff are still in quarantine, watching as long-awaited events get canceled one after another.

Of course, there are still reasons for celebration. Democrats have control of both the House and the Senate, and President-elect Joe Biden’s victory has been confirmed (again and again). The United States government is returning to normalcy after a four year period of chaos.

But President Trump’s exit from the White House does not mean we will be seeing the last of him. His wide influence will be a cancer for years to come.

On Jan. 6, the country experienced what can only be described as an attempted coup, the incitement of which can be attributed to our own president. He managed to drive thousands of people to invade a national building on the basis of the lie that the election was stolen from him.

Even though Trump has been banned from major social media platforms like  Twitter and Facebook for his continued calls to violence, his primary forms of communication, his lies have already taken root in his supporters’ minds. They have welcomed this dishonesty with open arms and have no plans to stop fighting the result of the election.

Systemic racism is another issue that will not simply vanish with the dawn of a new year. Black and brown people continue to face police brutality and have not received justice for their mistreatment.

Until decades-long practices such as police brutality and the War on Drugs are eradicated, Black people will continue to suffer, and the end of 2020 is not going to change that.

Climate change has also rapidly worsened over the past decade, with the ice melting and glaciers retreating in the Arctic, as well as destructive wildfires in California.

2020 was the hottest year on record. Even with lower carbon emissions due to the pandemic, climate change is accelerating while an increased global dependence on single-use, disposable items pollutes the environment. Not to mention the dip in carbon emissions will not be sustainable when the pandemic is over, meaning we are still going to have to come up with ways to reduce climate change.

The beginning of a new year does not mean a new beginning. If we allow ourselves to become complacent, there is no reason to believe 2021 will stray from 2020’s unfortunate trends.

The harsh reality is that nothing will improve unless we change our ways. That means wearing a mask, avoiding gatherings and following social distancing protocols, as well as reducing one’s ecological footprint by reusing and recycling, reducing meat consumption and switching to more sustainable sources of energy.

Taking the pandemic seriously, minimizing the impact that our actions have on the environment and working towards a more racially-equitable society are undoubtedly hard work. But only when we persist in these efforts will we see the progress that we hope 2021 will bring.