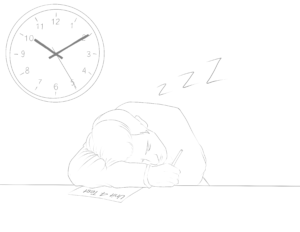 On  Dec. 13, following seven shortened class periods, the seventh period final will kick off finals week. In the following three days, students will take their fifth and sixth period finals on Tuesday, first and third on Wednesday and second and fourth on Thursday.

Between each two-hour-long testing period is a 90-minute break consisting of passing, tutorial and lunch. While students can relax during tutorial, they are expected to be inside a classroom to fulfill instructional minutes.

This new schedule has dissatisfied some students, as they believe including almost an entire day with a tutorial is counter-productive and too tiring. Senior Daniel Jiang and sophomore Aiden Kwok both have strong feelings about what should be changed to make the schedule more friendly towards test taking.

One of the primary concerns is the addition of an entire tutorial between tests, which may disrupt the focus of students. During last year’s AP exams, Jiang remembers struggling to concentrate after taking his AP United States History (APUSH) exam early in the morning. After taking an hour to rest after his exam, he logged onto Zoom to attend his fifth period class. However, he said it was difficult to concentrate on the lecture after taking such a lengthy break.

“I took the test in the morning, and then went back for fifth period. I was really energetic after I finished the test, but after 30 minutes I just crashed and didn’t want to go to class,” Jiang said.

Jiang hopes that the break may be cut shorter so students don’t grow tired between testing periods or lose focus.

While the rest interval allows time to recuperate between the two intense testing periods, 90 minutes might be too long to be effective, sophomore Aidan Kwok said.

Shortening the break would also allow for an earlier end time, which is desired by many students, according to Kwok. This earlier end time would provide benefits such as giving students more time to study and rest after school.

“I think a shorter break would definitely be beneficial because students can concentrate on the next test.” Kwok said, “When the break is too long, it messes with their focus.”

In addition, students would feel less pressed for time as they would be released before lunch, Jiang said. He added that after two periods of testing, relaxing with friends and eating lunch without the burden of an upcoming test would relieve stress.

“I think an earlier end time would be really nice because it gives us time to de-stress and relax.” Jiang said, “Students would be less likely to burn out over the course of the week.”