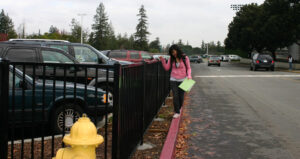 A student navigates around a fence recently installed in the front parking lot.

Starting Dec. 6 many students were surprised when they pulled into the parking lot in the morning, only to find their usual parking spaces cordoned off for the construction of a new fence.

In addition to newly painted crosswalks, the construction represents the school’s efforts to improve the parking situation and increase in the lot.

Starting Dec. 6 many students were surprised when they pulled into the parking lot in the morning, only to find their usual parking spaces cordoned off for the construction of a new fence.

In addition to newly painted crosswalks, the construction represents the school’s efforts to improve the parking situation and increase in the lot.

The fence and crosswalks were intended to stop backups in the drop-off area in the front and keep students safer while crossing the crosswalk in the mornings. However, some students say the fence has contributed to tardiness and the backups on Saratoga-Sunnyvale and Herriman Avenues. Other students have not been directly affected, but are still unclear about the purpose of the fence.

“I think they put it there to stop people from crossing the [drop-off zone] in front of cars without looking,” sophomore Yifat Amir said. “It makes the flow of traffic smoother. I don’t get dropped off in the parking lot so the fence doesn’t bother me at all.”

This decision to install the fences dates back to almost a year ago. The need for a fence arose out of talks concerning the schools horrendous traffic and parking. It was recommended that, in order to eliminate the risk of a student being hit while crossing the drop-off zone, that a fence be installed, according to plant supervisor Brian Moran.

“Instead of having kids coming off the front parking lot and crossing at all areas all the way along, the fence makes it so that they have to go to a crosswalk and then cross,” Moran said. “[It’s] a total safety related issue.”

Construction of the fence is ongoing, as the final sections and the landscaping, which will be mostly trees and shrubs, still need to be put in place.

This cost includes pavement work for new curbs and speed bumps, landscaping and other various improvements.

Although the long-term effects of the fence are yet to be seen, the new construction has been successful in its ultimate goal to prevent students from being hit by cars during peak drop-off periods. However, many students and some staff remain critical of its effectiveness.

“It’s kind of useless,” junior Sophie Kang said. “I don’t see the point of it. The only reason I think it’s there is to make people stop walking across, but I didn’t know that we really had a problem with that before.”

MAP Government and World History teacher Mike Davey has been especially vocal on the flaws of the fence, even worrying that the fence may be causing more safety issues than it is helping to remedy.
“I think the administration created it with the goal of increasing safety, which is a good goal,” said Davey. “I have some concerns with it. The fact that students are now walking through the lanes where students are driving rather than those where parents are driving can create some safety issues.”

Davey suggested placing a crosswalk near the gym entrance since it is an often used building on campus. He also feels that at a time when funds are minimal, the school should not be spending money on ineffective fences.

Junior Penny Burgess called the fence “annoying” but added, “I hope that it will eventually be changed or adapted to help safety, and I can understand why the put it in, but it seems a little passive-aggressive. It also seems like a waste of money as it is now.”