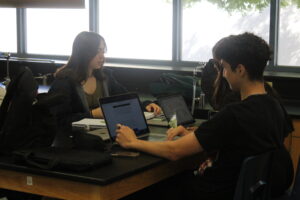 Photo by Atrey Desai
Students in science teacher Kristen Thomson’s class use their own computers during an activity.

Permalink
Students of both Saratoga High and Los Gatos High remain unsure of the logistics of the new plan.

In a Friday newsletter sent out by principal Greg Louie late last spring, the district publicized a new Bring Your Own Device policy, requiring students to either bring a personal device to school daily, or check out a chromebook from the district at the beginning of each school year.

The district believes the policy, first approved by the district board in 2019, will help prepare students for success in college and beyond. Another reason for the shift is  the district struggling to manage the aging, existing fleet of Chromebooks — and insurance rates for protecting against cybercrimes have skyrocketed for school districts.

Sophomore Sameera Kapur said that people with older laptops may be  negatively affected by this change.

“My computer is pretty heavy which causes issues with my back and it also has a really low battery life” she said. Classrooms don’t have enough power outlets for every student, leading to many to run out of power by the end of the school day.

Kapur believes that for some classes like English, where computers are used often, students should have an option of using a Chromebook from a permanent cart in the class.

Others like junior Jake Merill have more neutral opinions, who said he was fine with the changes and, before the policy, brought his own device to school.

Merill said he believes the change is due to the school possibly not having enough devices for everyone on campus.

This BYOD policy is not only affecting the district: A large number of schools are shifting to this new system as a way to lower costs while still allowing students to access and involve technology in classrooms. Though students may start to see the Chromebook carts around the school getting phased out, the school promises to continue to support students using current technology skills and prepare them for the digital age by providing the tools, skills and knowledge necessary.