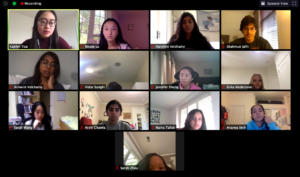 After the departure of former mock trial coaches three years ago, the club had been struggling to stay afloat. Before they could find another coach, assistant principal Matt Torrens stepped down as adviser in 2019, and competitions were put to a halt for two seasons. Club members were unsure of the future of mock trial, especially after low participation last season.

Journalism teacher Mike Tyler stepped up to the role of adviser last year, but the question of having an attorney-coach again kept the team from competing — the same outcome as the previous year. In a regular competition season, club members would study a case and hold a trial against teams from other schools.

In a stroke of luck this fall, Tyler and club president senior Kaitlyn Tsai were able to connect with class of 2013 alumna Ashwini Velchamy, who agreed to serve as a temporary attorney-coach. Velchamy is a recent graduate from Columbia Law School and was a former member of Saratoga High’s mock trial team, making her return a welcome surprise.

“I'm cautiously optimistic,” Tsai said. “Getting a coach is a huge improvement from these past few years — our club was hanging by a thread, and I'm extremely happy that we were able to salvage it in my last year. Competing in mock trial is truly an amazing experience, and I'm really relieved that I'll be able to provide others with that, even if we can't go to a courtroom.”

Club secretary senior Shahmun Jafri agreed with this sentiment. Given the COVID-19 pandemic, it is likely the competition — typically held in late December to early January — will be online. This also brings up anticipated challenges for the online season: With less in-person interaction comes the issues of team-bonding and adequate practices.

Regardless, club officers are excited to see the resurgence of members this year after a lack of interest last semester.

This year, the club will be placing a greater emphasis on interactive activities after competition season is over. Officers are currently thinking of incorporating discussions of timely legal issues during the second semester or hosting guest speakers.

Still, as of now, the focus is on preparing for and competing in the Santa Clara County competition, an opportunity all club members are ecstatic about.

“The spirit of mock trial lies in the competition,” Tsai said. “These past few years of trying to keep that spark alive without officially scrimmaging or competing has been stressful and frustrating, to say the least. But this year is a rekindling of that fire. We're officially back.”