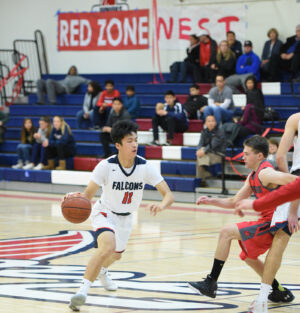 Empty seats are a too common sight in the SHS gym, says new coach Patrick Judge.

In any basketball game, two teams of five players race up and down the court in hopes of scoring. But for boys’ varsity basketball coach Patrick Judge, every home team has a chance for a sixth man: a large, enthusiastic crowd that can have a big impact on the outcome.

To increase attendance at games, Judge, who moved from Leigh High to Saratoga last June, is implementing strategies he used at the schools where he previously coached to attract more students to games.

“When there’s more people in the gym, you want to play harder,” Judge said. “Everything about having a great crowd makes the game more fun and gives [the players] more energy, and truly translates to the success of the team.”

For the past few months, Judge has been collaborating with the Spirit/Athletics Commission and ASB to design and release exclusive “sixth man” T-shirts. On Jan. 31, Judge distributed shirts to the first 50 students who attended the game against Lynbrook. At future games, he plans to give out more shirts as well as involve audience members in raffles with prizes such as Beats by Dre headphones.

According to Judge, the idea of “sixth man” T-shirts started at college basketball games, and the resulting increase in game attendance caused high school teams to also incorporate the shirt giveaways in their own games.

“Holding these types of promotions creates a sense of unity and school spirit,” Judge said.

Judge has also taken inspiration from schools like Mountain View, where the band performed at the Jan. 20 basketball game. Mountain View High students were all decked in coordinated beachwear and cheered on their school’s team.

Compared to those some other schools in the area, Saratoga tends to have a lower turnout. According to Judge, there are around 20 to 25 students in the stands every game.

Aside from distributing the T-shirts, Judge is also planning to host pizza nights where he buys pizza for everyone attending and halftime promotions in which audience members have to make baskets in order to win gift cards.

“I don’t mind spending my own money,” he said. “I just want kids cheering on their classmates. If we can start getting the word out that we’re doing fun promotions, the more kids that attend, and the more promotions that I can do and get behind.”

Players on the team have also felt the effects of a larger and more spirited crowd and are excited for what Judge’s ideas may lead them to in future seasons.

“A full crowd really allows the team as a whole to play  better, and it feels like our team is fueled by the energy in the crowd,” junior forward Kenneth Lee said.

Judge hopes that his efforts to bring in more crowds will help the Falcons reach their full potential, as he has noted with methods that have worked with previous teams.

“The louder, the crazier, the more fun [the crowd is] having, the better [the game] is for everyone involved,” Judge said. “It’s not something I just want to do once. I want to encourage the student body to come out to every game.”