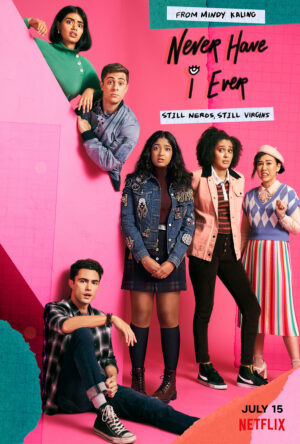 After watching Season 1 of “Never Have I Ever” on Netflix, I vowed to not watch Season 2 after it came out. Season 1 was — in a nutshell — a mess. But when the new episodes were released only a little over a year later, my lack of self-control took over: I binged the entirety of Season 2 in one night.

A quick summary of “Never Have I Ever”: Devi Vishwakumar, a 15-year-old Indian girl from Sherman Oaks, Calif., deals with the aftermath of her dad’s sudden death while navigating friendships, high school and crushes.

Let me start with why I was so adamantly against watching Season 2 — Season 1 made me want to gouge my eyes out. Devi is quite possibly the worst protagonist ever. Every time she is faced with a good and bad choice, she always finds a way to create an even worse choice for herself.

She is never there for her friends but expects them to be there for her. While she has a right to be extremely traumatized and devastated over her dad’s passing, she often uses it as an excuse to be rude and disrespectful to the people around her.

Moreover, the show uses slang that clearly indicates that the script has not been looked over by anyone under the age of 25. When a character says  “sup queens” or “yeet,” my heart broke a little (@Mindy Kaling, just let me write the slang — I’ll do it for free).

For these reasons, my expectations were extremely low for the current season. The only reason that I gave in was that I desperately crave Indian media representation, no matter how terrible it is.

To my pleasant surprise, however, Season 2 bounces back, exploring many themes while being a very enjoyable watch.

I found myself invested in Devi’s love triangle with Paxton, the classic dumb jock, and Ben, her academic competitor since elementary school. Granted, her attempt to two-time the boys is a major character flaw, but one that makes the show entertaining to watch because of how desperately she tries to keep them from finding out.

I was also impressed with how Devi deals with the trauma from her father’s death. Every time she is stressed or upset, she listens to a heartfelt voicemail her dad had left her. These voicemails add an emotional punch for the audience, and her insecurities about being called “Crazy Devi” help the audience sympathize with her (and her poor decisions) more.

Moreover, this season covered serious topics like coming out, eating disorders, familial relationships and mental health. The show seamlessly weaved these topics into the characters’ daily conversations and actions.

I was also a fan of Paxton’s character growth this season. With Devi’s encouragement, he transforms from a cliche pretty boy into someone who connects with his Japanese culture and puts effort into his academics. By the end of Season 2, I was glad that Paxton and Devi got together because of the way they balanced each other out.

On the other hand, I was extremely disappointed with the lack of character growth we saw in Ben. As we saw from last season, Ben is a genuinely nice character; although he says immature things, he does it to hide his own insecurities about being unpopular. This season, disappointingly, his character stays stagnant. We don’t see much about his progression of dealing with loneliness or his relationship with his neglectful parents. With Ben being one of the major characters in the show, it felt wrong to have his character stay static as the others matured and changed without him.

“Never Have I Ever,” even with its flaws, was one of the first times that I saw an Indian representation that didn’t fit the stereotype of a smart character with strict parents and a thick accent. Every character is wanted and desired at some point. Their Indian identities are not the sole focus, but rather something that adds to their overall character.

I like Season 2 so much that I would give it 4 out of 5 Falcons. While there were aspects of the show that I wish were different, it was miles above the first season. I am even excited and ready for Season 3!