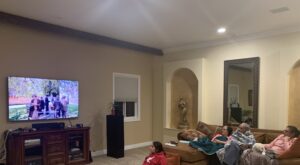 My family and I watch the final season of “Downton Abbey” on Netflix.

Most teens spend their Friday nights with friends, but not me. On a typical evening, you can find me seated comfortably in front of the TV, eating scrumptious brownies and watching the classic British series “Downton Abbey” with my grandparents, sisters and mom.

When my mom initially recommended the show this summer, I had low expectations. A historical drama about a British aristocratic family and social hierarchy set in the early 1900s? No thank you. But, to my surprise, I — along with the rest of my family — loved it.

The show is set at the fictional Yorkshire country estate of Robert Crawley and Cora Crawley, Earl and Countess of Grantham  respectively, and depicts the lives of the Crawley family and their servants.

Our obsession with the show began in July. Though each episode had so many moving parts and were over 50 minutes, we couldn’t help but watch more (Extra perk: You feel less guilty binge watching with others than alone).

It’s the simple yet iconic theme song and Crawley family matriarch Violet Crawley’s witty and honest one-liners such as “an aristocrat without servants is about as useful as a glass hammer” that make this show so enjoyable.

“Downton Abbey” is uplifting; the show makes you champion the central characters, feel emotionally connected to the setting and reminisce about a completely different world.

The incredible setting and phenomenal dialogues give all characters individuality as they mature throughout each season, like Daisy (an assistant cook), who grows from an uneducated kitchen maid to an assertive and intelligent cook and stuck-up Mr. Carson (butler), who opens up and shows vulnerability when asking for Mrs. Hughes’s (head housekeeper) hand in marriage.

The show creates an amazing sense of depth for each character, despite there being so many, which causes viewers to become invested in each character’s  love life, happiness and well-being. I get caught up in their lives, whether it’s wanting to know more about Lady Edith Pelham’s (daughter to Lord Grantham) work as a magazine columnist in a patriarchal society or

Ultimately, something about watching and discussing a show with my grandparents allows us to connect and bond despite generational gaps and calms the frenzy of my out-of-control college apps.

Through serving as a much needed escape from the frenzy of senior year and  allowing me to create invaluable memories with my family, “Downton Abbey” has reminded me to cherish each moment of time with family and realize what truly matters.