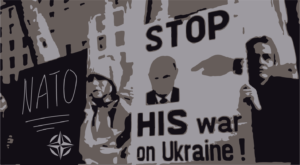 Permalink
While Putin is largely to blame for the Ukrainian invasion, NATO and the U.S. allowed for such a action

March 20 marks the 24th day since Russian troops began their march into Ukraine. The artillery that continues to fall across the country has forced over 1.5 million people to flee, while many more have tried and failed.

Hospitals and apartment buildings have been reduced to rubble while Ukraine’s citizens hide in shelters, waiting for the explosions to cease. However, the extremely determined and heroic Ukrainian president, Volodymyr Zelensky, has made clear that Ukraine will not back down from the invasion, facing Russian president Vladimir Putin “with ammunition, not a ride.”

A crucial detail about the situation is that the Russian people do not support potential invasions of Eastern Europe, with many protesting Russia’s invasion of Ukraine. In fact, the majority of the Russian public dread the return of the Soviet Union after fighting for years to remove the regime. Russia’s democracy is as far advanced, if not farther, than countries the U.S. has signed up to defend from Russia through NATO. As such, all heads have turned toward Putin, Russia’s “president” whose never-ending term is far from democratic, to blame for the invasion.

Putin’s invasion of Ukraine has been a result of his political ambition to unite the previous Soviet Union and to stir up nationalism and cover up his leadership failures. At the same time, though  the North Atlantic Treaty Organization’s (NATO) open-door policy, as well as the U.S.’s unwillingness to compromise, contributed to giving him an excuse to invade and cause horrible suffering and death to Russian and Ukrainian people.

The causes of the invasion date back to the end of the Cold War and the dissipation of the Soviet Union. Europe was left divided between NATO and the former countries of the Warsaw Pact. Since 1999, NATO has steadily extended its reach eastward, acquiring formerly Soviet countries such as Poland, the Czech Republic, Hungary and Albania.

The U.S.’s goal to spread its Western ideals while keeping NATO an active organization has been enough to warrant the uneasiness from unitary states like China and autocratic governments like Russia.

The first instance of Russian resistance to NATO Expansion occurred after the Bucharest Summit of April 2008. NATO issued a declaration that welcomed both Georgia and Ukraine, two former Soviet countries that reside on the borders of Russia, to join NATO and Putin directly stated that “Georgia and Ukraine becoming part of NATO is a ‘direct threat’ to Russia.”

This led to the Russo-Georgian War in August later that year, invading with tactics similar to Ukraine today: recognizing South Ossetia and Abkhazia as independent republics and backing them with military force. Georgia chose to fight back, but without the military backing of NATO and the U.S., they could do little to the Russian army. The war ended in 12 days, displacing 162,000 people and ceding 20% of Georgia’s territory to Russia. Russia was able to successfully prevent Georgia’s membership of NATO.

Another example comes in the months following the Maidan Revolution that saw the overthrow of the Russian sympathetic President Viktor Yanukovych. The parliament of the predominantly Russian Crimea voted to join Russia and Russians took the region. Russian troops stationed in the region beforehand annexed it as yet another way of spelling out there was no way Russia would allow NATO and the west to occupy strategic positions along its border like Ukraine.

Putin’s supposed rationale is not unique. The U.S.’s Monroe Doctrine, written in 1823, which pushed away all European influence in the Western Hemisphere, follows the same rationale. The Cuban Missile crisis was a modern day example of this: U.S. unwillingness to allow Russian mid-range nuclear bombs to be stationed in Cuba, even though it did not make any strategic difference, almost led to all out nuclear war. And while no such doctrine exists in Russia, today, Putin could say Ukraine is Russia’s Cuba.

While Putin’s invasion and treatment of the Ukrainian people is irresponsible and immoral, it is undeniable that the West’s ambition to expand its influence plays a large part in Putin’s initiation of the conflict. On March 16, the Kyiv Independent tweeted that Ukraine and Russia have drawn up a tentative peace plan: “a ceasefire and Russian troop withdrawal if Kyiv renounces NATO membership ambitions.”

While the plan serves as proof of Ukrainian and Russian efforts to end the invasion of Ukraine, it doesn’t mark the end of conflicts about NATO between the U.S. and Russia.

The conflicts in Ukraine, Georgia and Crimea prove that expanding without regard to Russian interests may lead to dire consequences. Therefore, NATO should exercise great caution around these regions and reevaluate their expansionary policy to accommodate these interests.