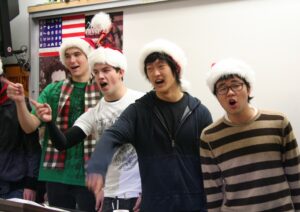 If the members of Chamber Singers returned home with scratchy voices this past Wednesday, it was easy to see why. In an annual fundraising tradition, they delivered Carol Grams from class to class with holiday spirit and undiminished energy.

If the members of Chamber Singers returned home with scratchy voices this past Wednesday, it was easy to see why. In an annual fundraising tradition, they delivered Carol Grams from class to class with holiday spirit and undiminished energy.

And as the holidays get closer, the Chamber Singers aren’t the only ones spreading holiday joy. Recently, the music department has been hard at work getting prepared for its annual Winter performances. A group of student leaders are working to pull it together.

“In the winter time, the music department is definitely busy but really fun, too,” said sophomore Hansen Qian, one of the orchestra managers.

Qian and other managers in the music department worked tirelessly with music director Michael Boitz to put together the Winter Concert.

“The December concert is always a fun concert, like a light Pops concert,” said Boitz. “It’s going to be short and sweet.”

The orchestra also performed at its Winter Concert on Dec. 9. The Symphonic Wind Ensemble members joined the Saratoga Strings Orchestra for the concert to create a Symphonic Orchestra. The string players performed pieces such as “Masters in the Hall” and “Sleigh Ride.” The Saratoga Symphony also premiered a composition by Boitz called “The Morning Star: A Chorale Prelude.”

“We only had a short time to rehearse with everybody,” said junior Debbie Lin. “But I think we made a lot of progress and I think it’s going to be great.”

The Chamber Singers also had their winter performance on Dec. 2 at the Filoli Center in Woodside and sang at the Saratoga Country Club on Dec. 10. They performed at the faculty Christmas Luncheon as well on Dec. 11. On Dec. 8, the Concert Choir performed at the Foothill Club as well.

The choir embarked on its annual over-night trip to San Francisco from Dec. 17-18.

“The SF trip is one of the most anticipated trips of the year for the singers,” said choir director Jim Yowell. “It is busy but a fun time because they are with their friends and always singing and making people happy.”

The different choirs will carol in different hotels and at popular Christmas hot spots, such as Union Square and Fisherman’s Wharf. They also plan to watch the popular musical “Wicked.”

“It’s a time for us to hang out and eat together,” said senior Victor Wong. “When I was a freshman, we watched ‘Jersey Boys’ and it was the best. I’m pretty excited to watch ‘Wicked.'”